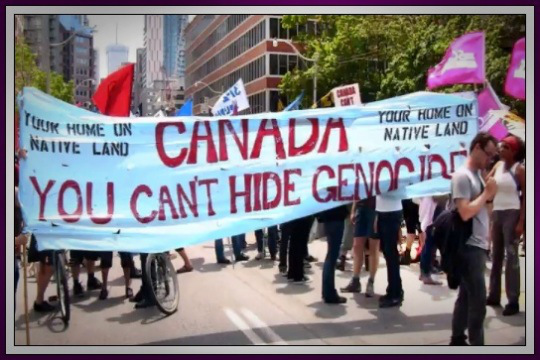 “I’d like to talk about the history, of the bigger loss of culture, of the loss of parenting experience…that was robbed from us. And we don’t have any social norms and values anymore. Like, they’re kind of lost in between. And it affects everyone” — (Aboriginal youth, report from Aboriginal Healing Foundation, 2007).

Representative of a broader national trend of Aboriginal youth comprising Canada’s fastest- growing demographic, three out of four Attawapiskat residents are under the age of 35. Canada’s destructive treatment of the country’s original inhabitants has had profound intergenerational consequences, and thus, the extremely young Aboriginal population continues to suffer from this history. The crises Aboriginal people face today are a direct legacy of colonialism, which was a founding pillar of capitalism in Canada. This legacy includes intergenerational trauma resulting from the residential school system. The residential school system’s main objective was to “kill the Indian in the child.” The state forcibly removed Aboriginal children from their homes in order to isolate them, in the most violent manner, from their traditions and cultures in an attempt to assimilate them into the dominant culture. The Truth and Reconciliation Commission correctly declared Canada’s actions toward Aboriginal peoples as “acts of cultural genocide.” But this amounts to not only the attempt to eradicate a culture, but also the people from whom that culture has been stripped. A research project by the Aboriginal Healing Foundation found that in a sample of residential school survivors, 75 per cent of the case files contained information of post-traumatic stress disorder, substance abuse and major depression.

Hundreds of years of suppression of traditional indigenous culture, combined with general marginalization from the dominant culture, has been recognized as a major risk factor for suicide among Aboriginal youth. The distress in these communities is labelled as an “epidemic” because suicide has a wide impact on family, peers, and other loved ones who in response could be driven to consider suicide themselves. The Aboriginal Healing Foundation determined that “The circle of loss, grief, and mourning after suicide spreads outward in the community. In small Aboriginal communities where many people are related, and where many people face similar histories of personal and collective adversity, the impact of suicide may be especially widespread and severe.”

One important conversation developing is the fact that one-third of all suicides in Aboriginal communities are committed by people who are LGBTQ or two-spirited. Although the definition varies across different territories, two-spirit is “a term used to describe people who assume cross, or multiple, gender roles, attributes, dress and attitudes for personal, spiritual, cultural, ceremonial or social reasons.” Traditionally two-spirited people were highly regarded by their community because they were seen as having special gifts by carrying both male and female energies. This understanding changed with colonialism and church-run residential schools that aimed to redefine how Aboriginal people related to gender and identity.

The violent disruption of Aboriginal peoples’ way of life has not only resulted in the struggle to survive culturally and spiritually, but also materially. A statement from Occupy INAC Winnipeg, which occupied the Indigenous and Northern Affairs Canada office, explains that “these crises are not new and do not exist in isolation. Suicide has long plagued our communities due to centuries of colonialism and its effects: crushing poverty, substandard housing, imprisonment, child apprehension, and lack of access to health care, nutrition, and clean water.” This is a shameful disregard of human life by a handful of politicians and businessmen that manage the affairs of our country.

The Aboriginal Healing Foundation suggested that “providing mental health services, mobilizing social support, and increasing community involvement for these youth and their families should reduce their risk of suicide.” These should be fundamental demands of First Nations’ communities to address this crisis. But funds for the most basic human rights such as clean drinking water, adequate housing and the resources to adequately meet the needs of Aboriginal people have not been provided for decades, leading to despair and a lack of hope for the future among young people.

There must be sufficient funding for mental health care and counselling facilities, which are completely lacking or overwhelmed in these communities. Adequate access to psychotherapy, medication, and other forms of healthcare must be provided immediately. But the report also made another important point: “However, rather than turning Aboriginal communities into “therapeutic milieus” where everyone is preoccupied with mental health issues, it may be more effective to directly address the social problems that affect whole generations of young people by supporting community development and political empowerment.” We must address the roots of these issues, and provide the resources needed to avoid mental health crises in the first place.

The crisis in Aboriginal communities is a crisis of capitalism

Capitalist plans for “development” in First Nations’ communities have amounted to corporations exploiting Aboriginal people and their lands, with no genuine improvements in living standards, and often with major environmental consequences. With massive mining companies such as DeBeers extracting billions of dollars of natural resources (with $392m worth of diamonds from their Victor Lake mine on lands next to Attawapiskat in 2013 alone), Canada’s First Nations communities continue to be violently robbed of their wealth.

Yet instead of addressing the need to invest in these communities, former Liberal Prime Minister Jean Chretien commented “There is no economic base for having jobs there and so on, and sometimes they have to move, like anybody else.” While urban areas do have more resources and employment opportunities, for those that can manage to pay for moving expenses, this has not solved the issues of oppression, discrimination and poverty. According to the 2011 National Household Survey, 56 per cent of Aboriginal people already live in urban areas. One-third of the homeless population in Toronto are Aboriginal, marking a drastic over-representation as they comprise an extremely small fraction of Toronto’s population. In Thunder Bay, Aboriginal people comprise 50 per cent of the homeless population. Aboriginal people make up less than 5 per cent of Canada’s total population but comprise over 25 per cent of Canada’s prison population. More than 36 per cent of women in prison are Aboriginal.

Leaving aside the clear inadequacy of “just moving”, Aboriginal people have highlighted that these communities are not only their ancestral land, but also home to their families. Aboriginal families in Canada have been forcefully torn apart for over 150 years and adding to this trauma is not a solution. In addition, it has been found that First Nations communities with the lowest suicide rates are those that experience “cultural continuity”. To truly support Aboriginal peoples’ right to autonomy includes their right to live where they have a connection with the land that is a component of their history, ancestry and traditions.

Aboriginal people have suffered at the hands of capitalism for centuries. Enough is enough. We need a radical change, not empty apologies and promises from our governments. If we want to seriously work toward a solution for Aboriginal people, we must take democratic control of our resources. Only then will local Aboriginal communities be able to genuinely control their own fate. Education, healthcare, social services, recreational facilities, full employment, safe and adequate housing, potable drinking water and clean air – these are the most basic human rights. If capitalism cannot fulfill these simple rights, then capitalism itself has no right and no reason to exist.

Unite and fight back!

A series of rallies and occupations of INAC (Indigenous and Northern Affairs Canada) offices in Toronto, Winnipeg, and other cities has demonstrated that there is a movement to fight back. In Attawapiskat, there has been a youth council created where they have placed demands to improve their community, including: youth and parenting centres; better education; an end to the plague of drugs and alcohol; a recycling centre; sports and recreation facilities; libraries; cinemas; shelters; mental health response and treatment; to represent themselves on Youth Councils; knowledge of their chants, their songs and their skills for surviving on the land; and to meet with the prime minister. 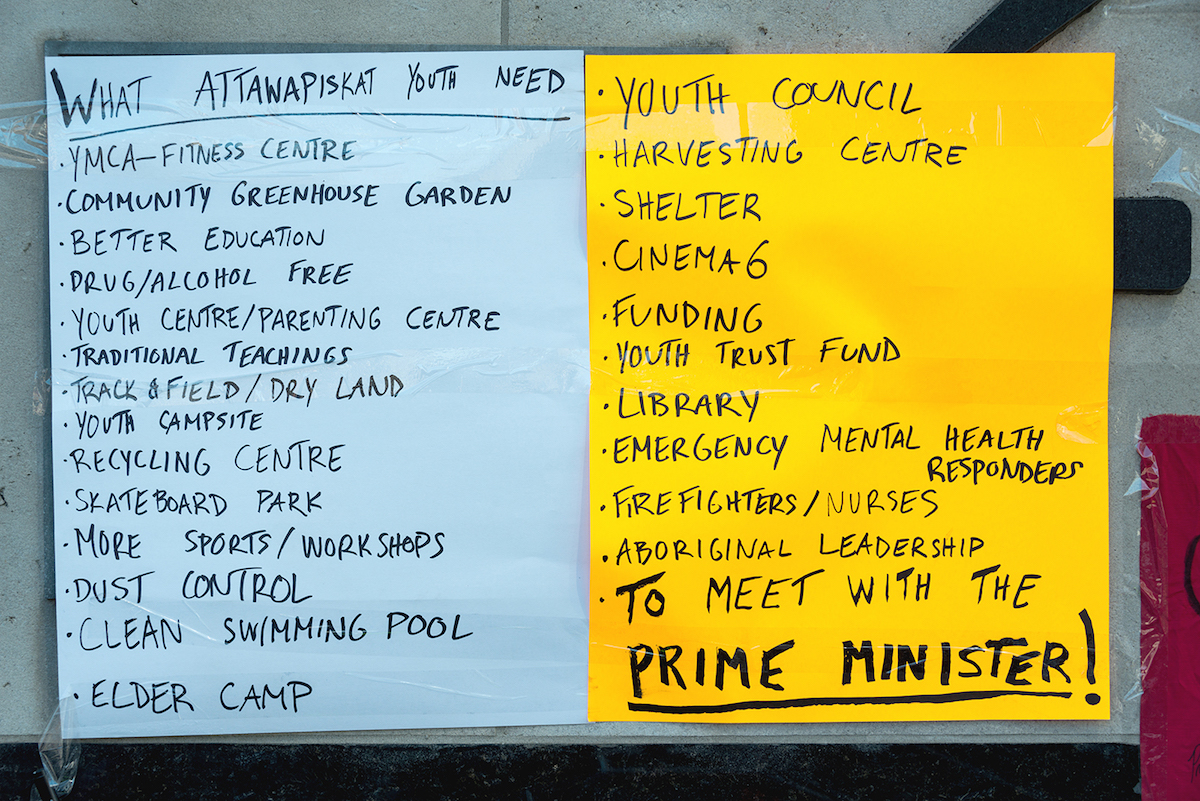 The recent federal budget has apparently issued an increase of funding for Aboriginal communities, and Prime Minister Trudeau has said he wants a “nation-to- nation” relationship “based on recognition, rights, respect, co-operation and partnership”, but this must be viewed with extreme skepticism. An allocation of $8.4 billion over the next five years is presented as a solution to issues of education, reserve water, and child and family services. However, the president of First Nations Child and Family Caring Society has critiqued this promise, as the amount assigned to Child and Family services falls extremely short of the funding required. It is also important to note that a large portion of the investments will not be delivered until five years from now – outside of the Liberal mandate and after the next federal election. Therefore there is much room for the Liberals or another government to renege on this promise. Aboriginal youth facing the risk of suicide need help now, and not in half a decade!

The Canadian state has clear class interests: any recommendations or demands which go against these interests will not be carried through or will be manipulated into safer channels. In the final analysis, despite the rhetoric of the Liberal government, the capitalist state and big business see Aboriginal communities as an obstacle to the complete exploitation of this country’s land and natural resources, in the same way that they see strong unions and worker solidarity as an obstacle to maximum exploitation of all workers. As long as the capitalists control our industries and run our country, profit will be the key motivating factor in its affairs.

To keep the Liberals to their promises, and ensure the money comes now and not in 5 years, we need to mobilize a mass movement. Canada is rich in natural resources and wealth, and there is no excuse for Aboriginal communities, even in the remotest regions, to be denied a quality standard of living. It is not enough to occasionally provide an increase of funding to Aboriginal communities in times when crisis is exposed. The labour movement and all sectors of the working class must launch a campaign in solidarity with the Aboriginal population to fight against racism, support their right to autonomy, and cut across the artificial divisions of working class and oppressed people on which capitalism thrives. The callous disregard for Aboriginal land and treaty rights, terrible conditions of Aboriginal people on and off reserves, and a suicide crisis afflicting mostly youth, starkly reveals the complete moral, economic, and political bankruptcy of this system. The system that oppresses Aboriginal people is the same system that exploits all workers and oppressed in this country and around the world and it is therefore in all of our interest to fight it.

Release the funding now to address poverty, health problems, mental health challenges, unemployment, and lack of opportunities for youth in Aboriginal communities across the country!

Aboriginal people must be able to democratically control their own fate, historical lands and resources!

For a united struggle of Aboriginal and non-Aboriginal workers and youth against racism, discrimination and capitalist austerity!