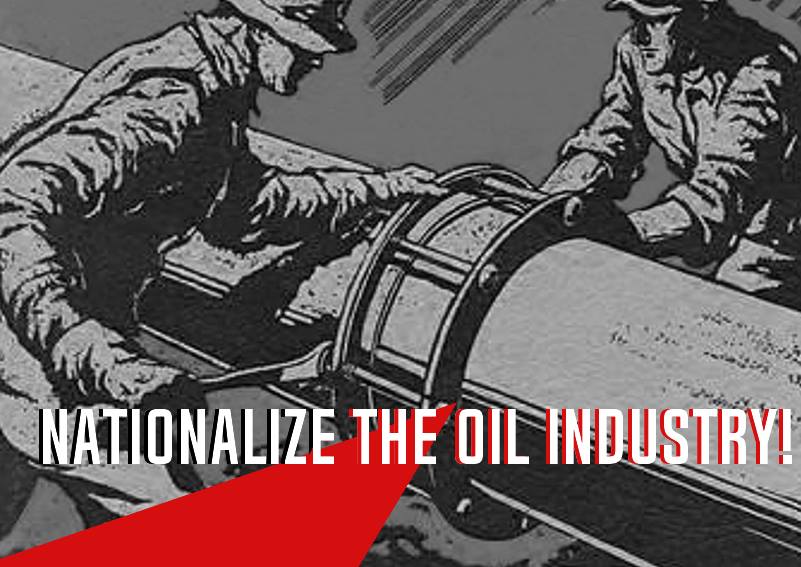 On June 7, around 20 people gathered at the University of Alberta to discuss the ongoing pipeline crisis and the need to nationalize the oil industry under democratic workers’ control. The event was organized by Socialist Fightback Edmonton, and brought together a variety of people who were angry about Prime Minister Justin Trudeau’s bailout of Kinder Morgan and wanted to discuss strategies to fight it.

Socialist Fightback activist Ted Sprague presented on the topic. He began by explaining what kind of nationalization was happening with Kinder Morgan: not one which is done for the public good, but one which socializes the losses and privatizes the profits, i.e. a corporate bailout. Sprague railed against Trudeau and Alberta Premier Rachel Notley’s argument that bailing out Kinder Morgan will be “good for jobs.” In fact, as a result of automation, the oil patch is now producing more oil with fewer workers. Those who are employed face reduced pay and poorer working conditions. Although the pipeline expansion will create some jobs, it will not be nearly enough to solve the jobs crisis. Kinder Morgan itself has admitted that the expansion would only result in approximately 90 new permanent jobs.

The environmentalist opposition to the pipeline, however, has not put forward a serious alternative. Many in this movement have pushed for “green” subsidies in an attempt to lower emissions. Sprague debunked these arguments, arguing that this strategy has failed to solve the environmental and jobs crisis.  He explained how “green” businesses become dependent on subsidies or tax breaks to make profits. As with any business, whether it be “green” or any other colour, profits are their foremost concern. For example, Nextera, a renewable energy giant, recently shifted its Canadian operations to the United States in light of the lower corporate tax rate under President Donald Trump. These “green” companies are fighting for the biggest subsidies, not for lowering emissions or saving the earth. At the end of the day, it is the working class that pays for these subsidies in the form of austerity or higher taxes. Green companies are powerless in the face of market forces. If fossil fuel companies can produce energy at a cheaper rate, the green companies will be left behind, or dragged along at the expense of the taxpayers.

Sprague concluded by saying that the only way out of this crisis is to nationalize the energy industry without compensation and have it run it under democratic workers’ control. Private ownership of the oil industry is a dead end which will continue to destroy the environment and leave workers behind. With democratic control, the benefits of the oil industry will flow into the hands of all, not just the few. A nationalized energy industry controlled by the workers would prioritize good jobs, while offering retraining at no cost to the workers if necessary. This retraining can be paid for many times over with the profits of the oil sector. Democratic control is also the only way to ensure a transition to renewable energy, Sprague argued. The massive amount of investment required for this task can only be fulfilled by taking the profits out of the hands of the oil barons, and into the hands of society as a whole. In this way, we can afford to build green infrastructure and run it without making a single cut to working class living standards.

There was a fighting mood during the discussion that followed. A variety of people expressed very strong support for nationalization. One audience member expressed the absurdity that “rich people are going to space while we melt away on a dying planet.” The same speaker went on to say that “Alberta has been getting milked,” in reference to the low royalty rates charged to oil companies. This has resulted in enormous profits for the oil barons, while the working class has been left in the lurch.

Despite what is happening in the province, there is an increase in the number of people who are calling into question the divine rights of Alberta’s oil barons. More and more people are open to a socialist solution. As Marxists, it is our job to provide that solution which has the ability to provide good union jobs to workers, guarantee retraining and retooling without hurting workers, protect the environment, and respect Indigenous communities. If you wish to join us in our mission to accomplish this, please reach out to us at fightback@marxist.ca.