Fight back against Quebec tuition increases: For a united student movement against austerity! 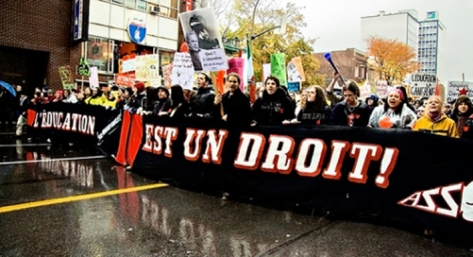 The budget released earlier this year by the Quebec Liberal government contained many worrisome aspects for workers and students in the province. Like all governments around the world, Jean Charest’s government has been putting harsh economic austerity measures on the table in order to deal with the record debt facing the province. Choosing their battles carefully, the Liberals have aimed their attacks primarily at Quebec’s students.    The government’s proposed plan, which is to come into effect for the 2012 fall semester, is to hike tuition fees by $325/year over five years, which amounts to a total fees increase of $1,625. This is on top of the $500 increase spread over five years, which the government started in 2007.

It is well known that the education system in Quebec is in a state of disrepair. Over years of funding cuts by both Liberal and Parti Quebecois governments, class sizes have ballooned out of control. The equipment and infrastructure at the public universities, CEGEPs, elementary, and high schools is falling apart. Using this as an excuse, the three main political parties, along with economic think-tanks, the media, so-called “experts”, and university governments, have all formed a united front against students and have all been unanimously pushing for higher tuition fees in the province.

This is identical to the tuition plan that was carried out in English Canada. Largely due to funding cuts, universities’ funding coming from from the government decreased from 80% in 1988 to less than 50% by 2008.  The drop in government funding was obviously covered by much higher tuition fees.  As a result, tuition fees accounted for 35% of university funding in 2008, up from 14% in 1988.  In British Columbia, revenue from tuition fees has even surpassed government revenue from corporate taxes.

In Quebec, the provincial government has wanted to attack education as in the rest of the country, but until now, have been largely unsuccessful due to a strong and determined student movement that has repelled most of the attempts to make students pay more.

But, the lack of government funding has left most universities in situations of near bankruptcy.  For example, L’Université du Québec à Montréal (UQAM) has amassed a debt of $565-million, while Concordia University is over $400-million in debt. What are the bourgeois recommendations to solve this debt problem? Raise tuition fees and lower the wages and benefits of campus workers!  If we look at the rest of Canada, the results of tuition hikes have been quite serious. In 1979, fewer than 30% of full-time university students worked during any given month of the academic year. By 2000, this had risen to 45%; we can only imagine that this number has increased significantly since then. This obviously negatively impacts working-class students’ abilities to perform well at school. But there is another side to this. Studies have shown conclusively that when tuition fees are increased, enrolment of students from lower income families drops off substantially. Many of the students who would have been working and going to university at the same time drop off while those with a slightly better financial situation are forced to take on a part-time job simply to stay afloat.

The increases put forward by the government have been combined with an ideological battle unleashed upon the population. The capitalists had to carry out this ideological battle in order to convince the population that they need to expect to receive less. The finance minister Raymond Bachand made statements to the effect that Quebec needed a “cultural revolution”; Quebecers needed to learn that everything costs money, and that they would need to start paying more for pretty much everything. What is being argued here is a rolling back of all of the fundamental gains of the Quiet Revolution of the 1960s and 70s. This was clear when in his budget speech to the National Assembly, Bachand said, “In the mid-1960s, students’ tuition fees represented 26 per cent of the total revenue of Quebec universities. In 2008-09, it was half that.” What this means is that throughout the struggles of the 1960s and 1970s, the working class of Quebec was able to win many important concessions from the capitalist class in Quebec and now, the bosses wish to reverse those gains.

All of the major student union federations, La Fédération étudiante universitaire du Québec (FEUQ), La Fédération étudiante collégiale du Québec (FECQ), and L’Association pour une Solidarité Syndicale Étudiante (ASSÉ), have announced campaigns to mobilize thousands of students against the $1,625 increase. The FEUQ/FECQ (which represent the majority of students in Quebec) have stated that a province-wide strike is a last resort and isn’t on the agenda, while the traditionally more radical ASSÉ’s plans include massive demonstrations leading up to a general student strike in the winter semester. This is all a very good sign that the student movement leadership is gearing up to seriously organize and mobilize the student population to defend accessibility of education in the province.

Learning the lessons of the past

Although ASSÉ took a strong stance in mobilizing for the student strike in 2007, their own actions also contributed to their isolation within the general student movement and exacerbated the divisions that exist.  Although their frustration was understandable, the ASSÉ leadership took an outright hostile attitude towards the other unions.  ASSÉ even passed a resolution stating that they aimed to “destroy” the other unions.  There has even been wars between the unions, where they have raided each others’ campuses in order to affiliate the local union to a different federation, as well as a refusal to hold common demonstrations. How can we expect to defeat Charest if we are divided ourselves? The capitalist parties are united in their attacks; we must be united in our response. Recent calls from the FEUQ/FECQ leadership for a united front against the tuition increases are therefore positive and we should work towards this goal.

The ASSÉ leadership has correctly understood that based on the history of the student movement, the government will not stop when confronted solely with a few demonstrations and some letter writing and information campaigns. Important as these sorts of campaigns are, they can only be supplementary to the active mass mobilization of the students for strike action. Especially now, this is more true than ever with the “Great Recession” removing any room the bosses may have previously had. On the other hand, we cannot fetishize the strike. The strike is not the goal in and of itself. In order to mobilize and organize normally apolitical students, it is necessary to start from where they are at, and through common action and communication, bring them to the conclusion that a province-wide united student strike is necessary to defeat the governments attacks. As ASSÉ spokesperson, Gabriel Nadeau-Dubois, said recently, “It breaks our heart to have to strike instead. We’d rather be studying.” It is important that the mass of students understand that the strike is an action that we are forced to do to protect ourselves.

For student-worker unity against the attacks

But at this stage, even a student strike alone might not be able to defeat the tuition increase. Students, unlike workers, hold no economic power. A student strike, when big enough, can act as a very useful tool in the ideological battle against the government, clearly showing that the mass of the population is opposed to their program. But, the student movement needs the economic power that the labour movement possesses. Striking workers can cost big business and their government millions every day and thus have the power to bring the government to its knees. This is why it is necessary for us to not only think of this as a student strike, but a general movement against austerity. With both the CSN and the FTQ declaring their support for the students’ struggle, this is very positive. But the solidarity shouldn’t stop there; the unions should mobilize to bring workers to the student demos, establish picket solidarity squads, and strike solidarity action. Unity is the only way forward!

Every poll shows the majority of the population opposed to the government’s austerity measures. Jean Charest is now the most unpopular Quebec premier in history.  Despite this, the tuition increase is going ahead and more austerity is on the agenda. How can a government act in such direct opposition to the interest and will of the majority of the population? The answer is simple — they are a government wedded to the capitalists in Quebec and this is the class they serve. They have nothing in common with the working population and therefore look with disdain upon the workers and youth who, in their opinion, clearly don’t understand “sound economics”. That is, economics where they and their friends get bailed out to the tune of billions, while the rest of us have to foot the bill.

The implications of these attacks are much broader than they may immediately appear. As Nadeau-Dubois said recently, “What is hiding behind this increase is an attempt to privatize the education system in Quebec.” These words are undoubtedly true, but this isn’t all that is going on. These are just the first small cuts in the eventual gutting of the social welfare state in Quebec.  After the government has targeted students, they will focus on other areas where they need to “trim the fat”. Tomorrow, it will be the $7/day daycare system. Then, it could be the healthcare they want to privatize, or perhaps the raising of hydro rates and transit fees, or the public sector workers they wish to lay off.

At root, this is a struggle between two visions for society. On the one side, the bosses and their cronies seek to submit education to the will of the market and treat it like any old commodity. They want, and need, to roll back the tape of history to the time when education was merely a privilege for the children of the rich. On the other side, the workers need to defend the rights they fought long and hard to win, and to maintain the ability for their children to have a good education. The vision here is that education is a benefit to society as a whole, and therefore should be funded and controlled by society.

Students, workers, we need to stand together against these attacks. An injury to one is an injury to all.