On Wednesday, May 23, six members of the far-right group Atalante stormed the office of Vice Montreal and harrassed the journalists inside. They were upset that a recent online article from Vice described them as what they are: an ultra-nationalist and racist identitarian organization tied to and modeled after the fascist Soldiers of Odin (SOO) in Finland. The members of Atalante gave a plastic award to the journalists titled “Vice Media Trash 2018”, and then left the building before the police arrived. The police concluded that the harassment was not worth pursuing and that it wouldn’t be a problem in the future. In fact, the mobilization of the far right has become a growing problem in Quebec. The “white-identitarian” nationalist movement, however marginal, is becoming bolder and more outspoken. 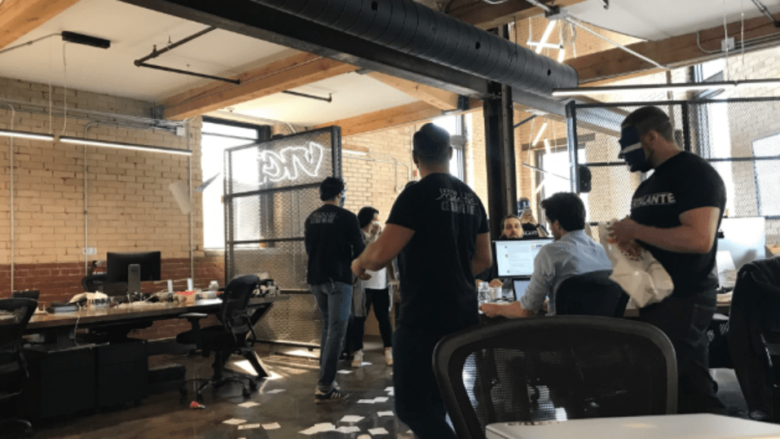 Fascists have a long history of shutting down the press as well as intimidating and inciting violence against political opponents. More recently, white supremacists and their apologists have  repackaged themselves as defenders of “free speech”. Many far right groups have organized demonstrations on this basis. La Meute and Atalante, for example, held a march last year for their “right” to spew their vile hatred towards Muslims and immigrants. In reality, their defense of “free speech” is just a hypocritical cover for their general campaign to terrorize immigrant communities and silence their political enemies. An example of the depths that the far right are willing to sink to was seen when they killed Heather Heyer at the rally in Charlottesville last August, or when Alexandre Bissonnette shot six people at a mosque in Quebec City in January 2017.

Some on the left have warned that a resurgence of fascism, such as existed in the 1930s, is now imminent. However, the fascist organizations of today are tiny and do not have a mass base. They are only a shadow of the mass fascist movements of the 1930s. In those days, the Italian and German fascists acted as a paramilitary force which could murder their opponents with impunity. This is not the case with the far right today. Doing so would result in an enormous backlash from the masses, who would immediately put the fascists in their place. The social base of fascism has also been enormously weakened. In the 1930s, the peasantry served as a fertile ground of recruitment for the fascists. Today, the peasantry is almost non-existent, whereas the working class now makes up the majority of Quebec society.

That being said, these groups do pose a threat and their despicable actions should not be taken lightly. Even though no one was physically harmed on Wednesday, we cannot allow the far right’s thuggish behaviour to be tolerated. We must defend ourselves against these their attacks and not back down. Many people, including Gabriel Nadeau-Dubois of Québec solidaire, believe that we can rely on the state to defend ourselves against fascist provocations. However, the state is far from a neutral arbiter in this conflict. This is evident when comparing the state’s lenient treatment of La Meute and Atalante with their heavy-handed crackdown on the student strike of 2012.

The only power we can rely on is our own. Mass mobilization of the working class, students and communities is the only way to drive out these fascist thugs once and for all. It falls on the shoulders of the labour leaders and student unions to help make this a reality.