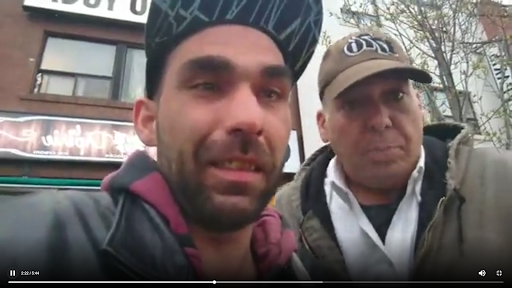 Fightback is being targeted by the far-right. On April 20, two individuals associated with the Yellow Vests Canada movement and the Canadian chapter of PEGIDA (Patriotic Europeans Against the Islamisation of the Occident), Rick Boswick and Derek Storie, posted a livestream to social media in which they make explicit threats against our organization. Filmed right outside of the Fightback national office in Toronto, Boswick and Storie announce threateningly that “we have a plan for this place”. They go on to broadcast the address of the Fightback office to their online supporters and appeal to their audience to harass and disrupt our activists.

One of the two can be heard saying, “I have a job for all patriots, we need to take this place down”. They go on to specify that this should be done “peacefully” only to continue, “as peacefully as you can, ‘cause it’s getting close to where we have to ‘go France’.” It is clear that these individuals only added that any actions against Fightback should be “peaceful” to absolve themselves of any responsibility while also giving their supporters an obvious wink and a nudge to take violent action.

This is not the first time these particular individuals have targeted Fightback. In late March they posted another video explaining that they had plans to disrupt one of our socialist pub nights with smoke grenades, but had decided to call the planned action off after “talking with Faith.” Here they are referring to Faith Goldy, a white nationalist and Nazi sympathizer who was fired from the right-wing Rebel Media for appearing on an openly neo-Nazi podcast, whom it seems these individuals are actively coordinating with. Despite backing down from attending themselves, the two went on to announce the address of the bar and encouraged their supporters to show up and disrupt the event.

Especially considering their ties to Faith Goldy, it is not surprising that the likes of Boswick and Storie are targeting Fightback. In 2017, Fightback helped organize a protest against Goldy at Ryerson University which resulted in the university cancelling the event she was scheduled to speak at. More recently this past March, Fightback helped to eject Goldy and several yellow vest supporters from an anti-racist demonstration at Nathan Phillips Square. Fightback has also been a visible force at several anti-racist and anti-fascist demonstrations across the country in the last couple years. Goldy, her yellow vest goons and various far-right and fascist groups now see Fightback as one of their main targets.

Unite against the far-right!

We will not be intimidated by threats and intimidation from the far-right. The reality is that their forces are small and the majority of workers and youth are appalled by their hateful and discriminatory rhetoric. However, emboldened by the election of Trump in the U.S. as well as the likes of the Doug Ford PCs in Ontario and the anti-immigrant CAQ in Quebec, they feel more confident about crawling out of their holes and antagonizing Muslims, Jews, immigrants, black communities, LGBTQ people, and left-wing organizations. Any time they are able to successfully intimidate and harass any community or organization will only embolden them further. This simply can not be allowed.

It is in the interest of all left-wing and revolutionary organizations of all stripes, as well as workers’ organizations and grassroots community groups, to defend each other from fascist attacks. When there is a real threat on other organizations Fightback will be there to defend them, and we hope others would do the same for us regardless of political differences. This is not the time for sectarian infighting. We have a common enemy and unity is required to drive it back.

The surest way to defeat the far-right is through mobilizing the broadest layers of the working class, as well as students, youth and especially marginalized groups, into mass struggle against the fascists. Trade unions, student unions and labour councils have a significant responsibility in this, as their infrastructure, resources and mass memberships mean they can mobilize on a much more massive scale than smaller revolutionary and anti-fascist organizations can. The organized working class could sweep the fascists away like a speck of dust!

The union leadership must do its duty to organize against this violent threat. We encourage activists and anti-fascists within the student and labour movements to move resolutions within their locals to set up flying squads which could mobilize their membership to respond to any fascist threat against other organizations or planned demonstrations at a moment’s notice. It is time for the student and labour movements to take decisive action against the far-right menace and make it impossible for them to organize and act on their hateful views.

As long as we live under crisis-ridden capitalism, which pits layers of the working class and oppressed against each other in the struggle for survival, the bosses will aim to promote racism and other discriminatory attitudes to distract from the real reasons for capitalist crisis. To oppose the small but virulent far-right, it is not enough only to be against something; rather, we have to fight for something as well. The fight against fascism must be tied to the fight for the socialist transformation of society, where production occurs for human need rather than the profits and greed of the few. This perspective undercuts racist and discriminatory ideology which blames the crisis and poverty on oppressed groups, instead of the capitalist system and its parasitic ruling class. The exploited and oppressed have everything to gain from uniting against capitalism and fascism, for socialism!

We will not be intimidated!

For mutual defense of left-wing, workers’ and community organizations from fascist threats!

Shut down all racists and fascists through mass mobilization!

Please get in touch with us at fightback@marxist.ca if you wish to express solidarity, get involved, or communicate about a united front against fascism.