On Tuesday, May 21, Bowmanville, Ont. unveiled the first rainbow crosswalk in Durham Region as a symbol of support for the LGBTQ community. Within hours of its installation, the crosswalk had been vandalized with black streaks from a vehicle spinning its tires. 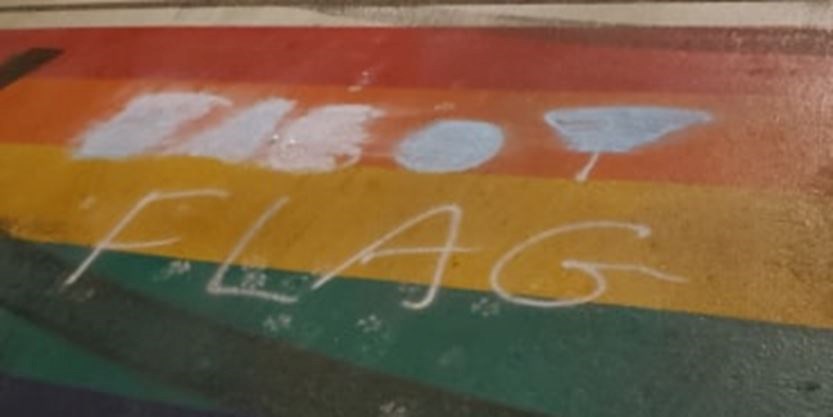 A few hours later, the crosswalk was again vandalized with tire marks. A video taken at the time appeared to show a truck causing the damage. In response, members of the community rallied by writing messages of support in chalk on the street beside the crosswalk, such as “Love Wins” and “Bowmanville Loves You.” On Saturday, however, the crosswalk was vandalized a third time, this time with the words “Fagot [sic] Flag”.

Due to the pattern of the tire marks, it is obvious that all three cases involved intentional damage to the crosswalk. Oshawa has seen a concentration in bigots vandalizing public property with hateful messages. A few years ago, anti-Muslim vandalism was popping up in bus stops across the region. Last year a Nazi flag was hung in a resident’s front window and police refused to respond.

When the first act of vandalism against the rainbow crosswalk took place, Durham police said they would investigate. However, the fact that it was followed by two more instances of vandalism suggests that police aren’t doing much. This slow and half-hearted response to messages of hate against the LGBTQ community reveals the real attitude of Durham Police. Symbolic actions of the police such as marching in the Pride parade and flying rainbow flags are revealed as so much hypocrisy.

In 2014 the author of this article was called a “faggot” at Durham Pride, and police kicked the author out of the area instead of the man who made the remarks. Last year at a meeting of Durham Region Pride, members of the community said they were uncomfortable with police participation in the Pride parade because of the systemic racism and transphobia that police clearly exhibit. These concerns were ignored by the liberals on the Durham Pride board. Police will pay empty lip service to the LGBTQ community; but when actual hateful acts arise, they remain silent and do nothing.

While municipal representatives say they like the rainbow crosswalk, the government was not wholly responsible for funding the project. In addition to contributing through their taxes, the local community had to raise half of the $8,000 to pay for the crosswalk. It is the people of Bowmanville who made the rainbow crosswalk possible as an expression of solidarity with the LGBTQ community. While police dithered in the wake of the vandalism, working people and marginalized folks immediately came together to show their support against the forces of hatred and bigotry.

The state in the last analysis consists of armed bodies of people in defense of property relations, who exist to protect the interests of the ruling class. Under capitalism, police are armed guards of the state protecting private property instead of being accountable to the community they are supposed to serve. Meanwhile, forms of prejudice such as homophobia and transphobia act as useful means for the capitalists to divide the working class and prevent us from coming together to fight for our common interests.