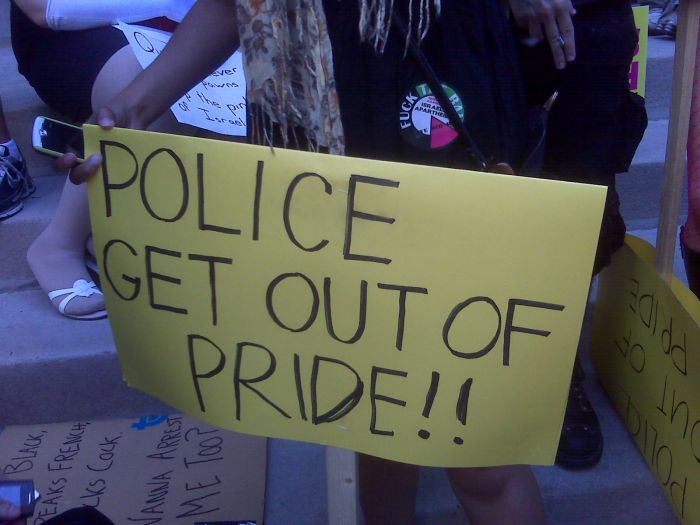 Durham Region Pride has recently been embroiled in controversy over the issue of whether to allow uniformed police to join the parade. This debate has pitted marginalized queer community members who face regular harassment by the cops against business-friendly liberals on the Durham Region Pride board. The issue came to a head at a Tuesday, April 24 meeting where voices of the community were limited and ignored. This conflict has torn open the class divisions within the LGBTQ community.

At a heated meeting to discuss the issue, the board did everything in their power to restrict democratic rights. Speakers were limited to two minutes each and constrained in what they were allowed to speak on. Despite these restrictions, the vast majority of community members stated they did not want police participating in uniform. The main point raised was that police perpetuate racism and transphobia. It is not difficult to see why. Twenty-two per cent of transgender and non-binary people have been harassed by the police. Trans people of colour in particular are six times more likely to experience police violence than the general population. Due to police discriminating against trans people and people of colour, members of both groups feel unsafe attending Pride with police in uniform. To quote one local resident, “This isn’t pride, this is white supremacy”.

Community members were told to bring statistics specifically pertaining to Durham regional police; however, the board knows that such statistics are not readily available to the public. This is promoting a normalization of academic elitism for Durham’s LGBTQ community, yet such elitism does not reflect the largely working class population of Durham Region. The labour history of Durham Region consists largely of union activity and the workers fighting the bosses, big business, the ruling class, and the status quo of society.

Community members detailed personal experiences to highlight discrimination committed by Durham Regional Police. One community member talked about reporting a male who raped him, but when he tried to report the rape to police they dismissed him, saying it was “just rough sex”. Another member spoke about how during Pride in 2014, they and their group of friends were subjected to homophobic slurs and inappropriate sexual comments from a man at a beer tent. Instead of ejecting the man, the police decided to eject them and their friends who were facing the abuse.

Despite a majority of people asking that police not be allowed to attend, the board for Pride Durham Region decided to allow police to march and participate in uniform. The Pride board has not even attempted to hide their bias on this issue. Anti-police comments from the community have been deleted from the organization’s Facebook page in the past, while comments in favour of police participation are often “liked” by the Facebook account. The facts are undeniable: The voices of many in the LGBTQ community are being ignored by Pride Durham Region.

At least two people have stepped down from Pride Durham’s board because of the decision to allow police to participate in uniform. Local artists are announcing they will not participate in Pride celebrations. The Writing Rainbow, an LGBTQ group, has announced that all of their events that were originally linked to the Pride celebrations will now be independent. However, this latest dispute only scratches the surface of the dissatisfaction felt by the community at large.

The Stonewall Riots that led to the Pride movement started as a radical protest against police discrimination. The police uniform symbolizes discrimination and brutality for those living in the community. Allowing cops to participate in Pride is an attempt to force marginalized people to “get comfy” with the history of police abuse. It is long past time that we revive the traditions of Stonewall, and set about building a movement that tackles not only police brutality, but the rotten system that gives rise to it.