In the midst of so many tumultuous events — the global financial crisis and bourgeois push for austerity, the BP oil spill, the Arab Revolution, and disasters in Japan — it’s easy to forget the slow, steady march to ecological catastrophe that remains ever-present in the background. Climate change is a reality, but the capitalists’ head-in-the-sand approach is a recipe for disaster in the face of this historically unprecedented challenge.

For decades scientists warned of the devastating outcomes that awaited a human race which failed to break its addiction to fossil fuels. Today those effects are occurring at a rate faster than the wildest previous estimates. The average global temperature rose by more than 1ºC during the 20th century — a seemingly slight difference that has already led to greater rainfall, more powerful winds, and harsher storms with attendant flooding. 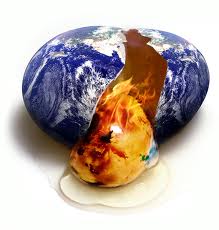 Our failure to deal with climate change is, simultaneously, the greatest threat to humanity and the most powerful argument for socialism. Centuries of industrial development, with their addition of greenhouse gases to the atmosphere, have set in motion a chain of events with unexpected consequences that will greatly complicate our efforts to cope. Capitalism is incapable of slowing these changes or guaranteeing the needs of the vast majority.

One of the most serious consequences of climate change is our increasing inability to feed ourselves. The Economist recently declared that food production will decline by as much as a third in the coming decades as increasing desertification and rising sea levels reduce the total amount of arable land. Once-predictable weather patterns have altered to the point where farmers cannot accurately forecast the growing season. Melting glaciers have dried up some of the most crucial sources of fresh water for a growing number of villages, while higher temperatures have expanded the geographic range of insects that spread deadly tropical diseases.

Already aging infrastructure will face new challenges as more frequent storms and floods take their toll. Rebuilding will become an increasingly unattainable option for poor communities devastated by extreme weather, and insurance rates will skyrocket. Should government step in, the cost of replacing and repairing infrastructure will compete for funds with services such as health care and education that are already being squeezed by the corporate elite as they aim to make the working class pay for the ongoing recession.

Lenin’s question is more urgent than ever: what is to be done? The capitalist system cannot alter humanity’s increasingly self-destructive course. Despite all the hype about “green industries”, the world economy runs on petrochemicals — fuel for transportation, but also the chemicals used to create plastics, computer chips, and most of the other technological wonders we associate with modernity. Any increase in the price of that increasingly scarce commodity, oil, is guaranteed to have devastating economic ripple effects.

When Barack Obama unleashed the latest US war against a Middle Eastern country, the capitalist press assured us it had nothing to do with Libya’s abundant oil resources. Yet the signature American foreign policy measure of the last few decades — its neo-colonial occupations and wars in the Middle East — are predicated in large part upon maintaining access to the region’s vast oil reserves.

Coping with the environmental degradation already wrought, and quickly transitioning to clean, sustainable sources of energy, is impossible under the current economic system. Let the abject failure of the Copenhagen Conference dispel any doubts: capitalist politicians will never take meaningful action against climate change if it interferes with the profits of their domestic industries, regardless of empty boasts and international treaties.

All the talk of “market-based solutions” to climate change is similar hot air. The so-called cap-and-trade system merely turns pollution into another commodity to be traded on the market, and cannot solve the fundamental problems. A carbon tax would be inherently regressive and fall hardest on the poor, many of whom already devote a hefty share of their income to heating and fuel costs.

The inability of bourgeois politicians to solve these pressing environmental problems would be infuriating enough, but it is the pernicious role of the corporate media that most exposes the utter bankruptcy and perversion of capitalist ideology. At a moment when humanity is facing its greatest crisis, our airwaves are saturated with industry-sponsored charlatans who cast doubt on the overwhelming scientific consensus behind climate change. They poison the minds of the masses and are an apt reflection of an insane system.

Bourgeois environmental movements preach anti-consumerism, and sometimes even anti-industrialism. Yet the much-vaunted consumerist lifestyle is increasingly attainable only by an affluent minority, and the negative environmental effects of industry can be mitigated depending on how resources and production are organized.

We are told by capitalists such as Al Gore that “every little bit helps”, and that everything starts with individual action. This is false. The vast majority of carbon emissions come from industrial sources. Figures from the British Department of Energy and Climate Change show that less than 10% of waste in landfills comes from households; the rest comes from large-scale industries and processes such as construction, mining and agriculture.

As socialists, we declare that the transition to a sustainable economy can only occur when the means of production are placed in the hands of workers themselves and utilized for social needs based on a rational plan. Just as Leon Trotsky developed a Transitional Programme in the 1930s to put workers’ day-to-day struggles in the larger context of working class revolution, so Fightback supports the Transitional Programme for the Environment put forward by British Militant Student supporter Adam Booth in 2006. We make the following transitional demands as prerequisites to meaningful action on climate change:

1) No to market-based methods!

2) No confidence in capitalist “treaties”!

4) For transition away from fossil fuels towards green industries!

5) For nationalization and democratic control of the banks and investment!

6) For democratic control of the media, education and research!