Capitalism has failed: we need a revolution 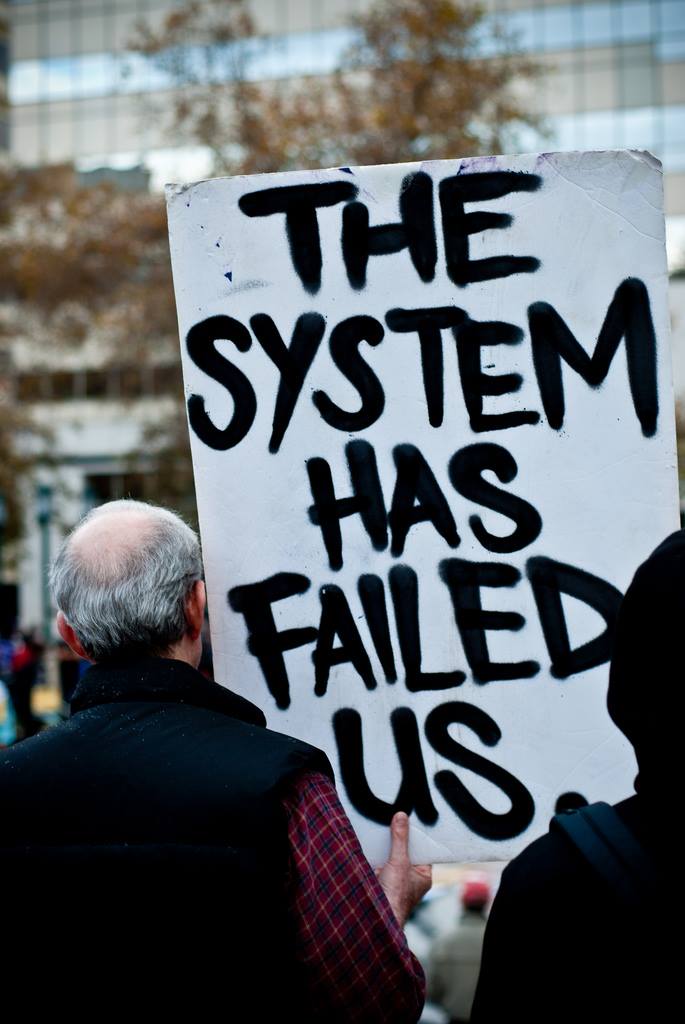 This year marks the 100th anniversary of the Russian Revolution. This was the first time that the workers and peasants of a country had taken power, entered into battle with the ruling class and emerged victorious. A century later, the capitalists still find the need to condemn what unfolded in Russia. Their lackeys in the media remind us that “communism failed” so much that it resembles a broken record. The reason for this is simple: they are terrified that it will happen again.

They are right to feel terrified. After the collapse of the Soviet Union, the ruling class proclaimed an era of peace and prosperity. The world was promised that under the guidance of the “free market,” all war, poverty and famine would eventually cease. Some even went so far as to argue that we had reached “the end of history”. Seeing no alternative, many chose to believe it. Now history has enacted its vengeance.

Nine years have passed since the financial meltdown of 2008, an event they said should not have happened – and what has capitalism brought us? The answer is clear: not a single one of the world’s problems have been resolved. In fact, things seem to be getting worse. Despite being in a “recovery”, most people find it hard to believe that the recession ever ended. Global GDP growth can hardly muster above three per cent, which makes this one of the weakest, if not the weakest recovery in capitalism’s history. This is largely being sustained by a massive expansion in debt, which reached a record $152 trillion or 225 per cent of global GDP in 2016, according to the IMF. They warn that “excessive private debt is a major headwind against the global recovery and a risk to financial stability.” Already a new crisis is being prepared, and the smoke has yet to clear from the last one.

The International Labour Organization estimates that the number of unemployed will swell to 200 million for the first time this year. This doesn’t take into account those in precarious jobs who are “underemployed”, which would bring the figure even higher. For those in a job, most have seen their wage growth fall dramatically behind pre-2008 levels. Despite endless talk of “ending poverty”, fully 71 per cent of the population are estimated to be living on less than $10 a day.

Even more gut-wrenching is capitalism’s toll on human life. It is estimated by the World Health Organization that 5.9 million children under the age of 5 died in 2015. 45 per cent of these deaths were due to malnutrition. Earlier this year, a UN official warned that 20 million people in Yemen, Somalia, South Sudan and northeast Nigeria were facing starvation, calling it “the largest humanitarian crisis since the creation of the United Nations [in 1945].” Of course, because these deaths occur under capitalist regimes and not “communist” ones, the ruling class and their lackeys pass them over in complete silence.

Many people choose not to follow the news anymore because of the sheer horror in the world. Every day it seems like there is another terror attack, another war, another mass shooting – so much that we almost get used to it. But these are only symptoms of a sick system in its decay. In 2017, this is what capitalism has to offer humanity.

But not all is doom and gloom – far from it! The breakdown of the system has met with 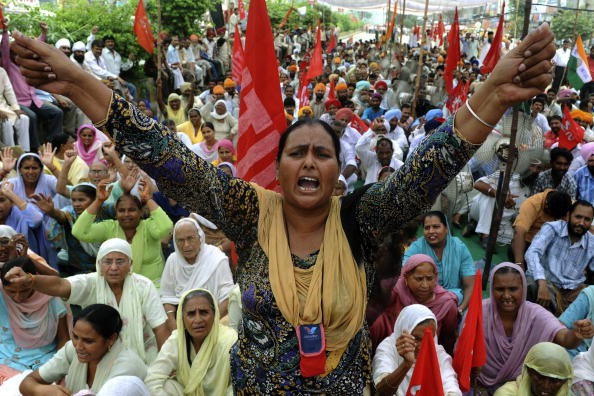 furious resistance from the working class. Last year, an estimated 150 to 180 million public sector workers staged a general strike in India. This was likely the largest general strike in world history. In April of this year, Brazil was rocked by its first general strike in two decades. Millions took to the streets against the scandal-ridden Temer government. Even in China, where civil liberties are severely curtailed, strikes and protests continue to increase year over year. From 2011 to 2013, 1,200 strikes and protests occurred throughout China. In 2014, there were 1,300 labour actions and 2,700 in 2015. And this figure is increasing.

The election of the xenophobic billionaire Donald Trump as president triggered mass protests across the United States – the heart of world capitalism. The Women’s March, which took place the day after his inauguration, was the largest demonstration in US history. Three to four million are reported to have participated. This doesn’t include the countless others who took part in countries across the world. The signing by executive order of the ban on Muslim immigration triggered similar protests in a number of major US airports. 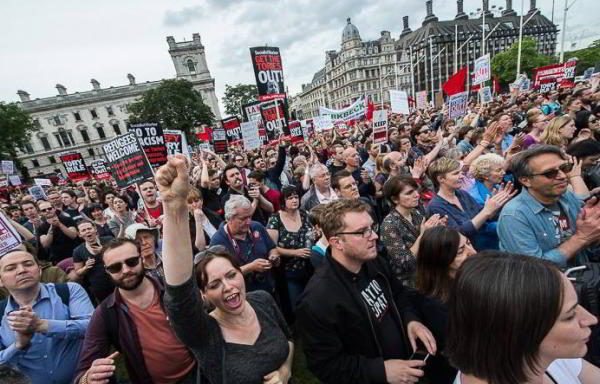 This pent-up anger has already found a political expression in a number of countries. The support for anti-establishment candidates like Bernie Sanders in the US, Jeremy Corbyn in Britain and Jean-Luc Melenchon in France are reflections of this. It also reflects a desire for an alternative to capitalist crisis.

A recent poll by the American Culture and Faith Institute revealed that four out every ten adults in the US say they prefer socialism over capitalism. Another poll by Gallup found that 69 per cent of millennials in the US would vote for a “socialist president.” A recent EU-sponsored survey asked Europeans aged 18 to 34, “Would you join a large scale uprising against the government?” More than half of all respondents said “yes.” The highest support was in Greece (67 per cent), followed by Italy (65 per cent), Spain (63 per cent) and France (61 per cent). Even in Canada, almost 60 per cent of adults said they wouldn’t be surprised to see “violent class conflict” erupting in the country, according to an EKOS poll. Is it then any wonder why the ruling class are so fearful of revolution?

Leon Trotsky, one of the leaders of the Russian Revolution, once defined revolution as “the forcible entrance of the masses into the realm of rulership over their own destiny.” The remarkable Arab Spring of six years ago is a recent example of this. Millions poured into the streets of Tunisia, Egypt and other countries, clearing away the mightiest regimes as with a giant broomstick. The colossal power of everyday working class people was stronger still. 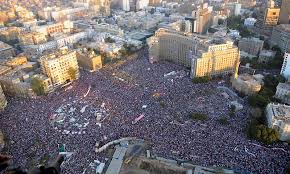 In the case of Egypt, the masses were able to topple two regimes in a span of two years, calling forth some of the largest demonstrations in human history in the process.

However, the Egyptian Revolution is not yet finished. All of the problems that led to the revolution, those of unemployment, hunger and the lack of freedom, still plague society. In other words, capitalism still continues to exist. What then was lacking? The answer is simple: a revolutionary leadership capable of seeing the revolution through to its logical conclusion – that is, the transfer of power from the capitalists and their cronies to the working class. In Russia, this role was played by the Bolsheviks under Lenin and Trotsky. In Egypt there existed no equivalent, which resulted in leadership being assumed first by the Muslim Brotherhood (which was later overthrown) and now the military.

Leadership is a fact of life in our society. Even the mightiest ship requires a crew to steer it. The question is – what kind of leadership will it be? Will it be the kind that tries to prop up this decaying system? The kind that makes promises to people which it knows it can’t keep? Or will be it the kind that calls out things for what they are? The kind that explains the need for overthrowing capitalism, the working class seizing power and the administration of the economy on collective and democratic lines?

Fightback and the International Marxist Tendency are building an organization that promotes workers’ power, just like the Bolsheviks did before 1917. We are active in over 30 countries around the world, from Canada to Pakistan to Venezuela and beyond. If you have ever felt dissatisfied with the world we live in and want to see it changed, then there is something you can do – you can get organized. You can join us in the fight for a better, socialist world, free from all exploitation, oppression and misery. There has never been a better time to do so. Join us – and let’s finish what the Russian workers started 100 years ago.