Bill 21 in Quebec: For a mass movement of civil disobedience! 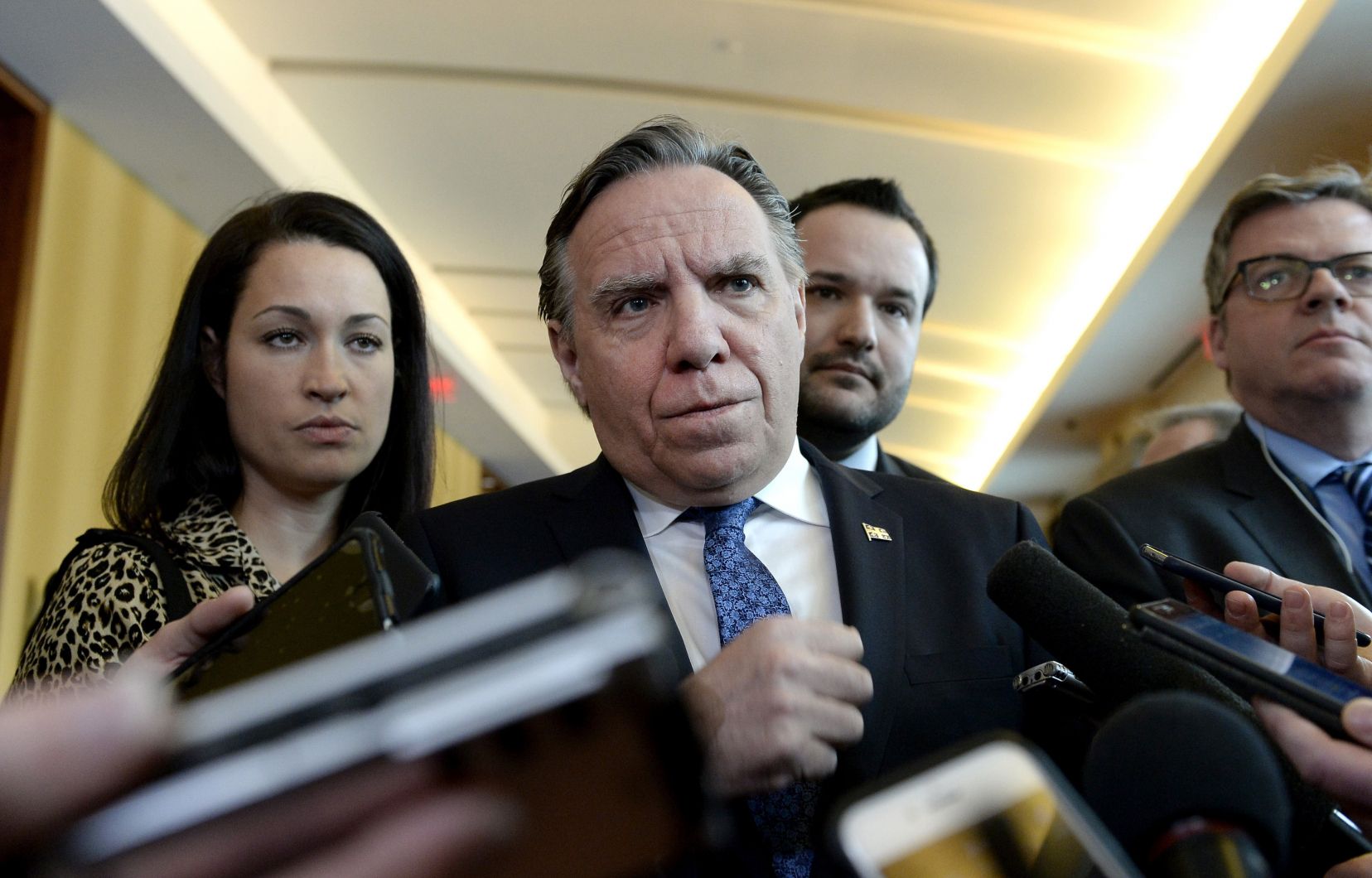 We publish here a translation of an article written by Julien Arseneau, member of the editorial board of the Quebec Marxist journal and website, La Riposte socialiste.

The long-awaited bill on secularism was finally tabled in the national assembly in Quebec. It contains, as planned, a ban on the wearing of religious symbols for many state employees, particularly for teachers. The MNA responsible, Simon Jolin-Barrette, says that Bill 21 is the “logical continuation of the Quiet Revolution and the de-confessionalization of the Quebec school system.” This statement is false from beginning to end. Despite the removal of the crucifix from the National Assembly, religious schools are left alone, which are largely subsidized by the state. Bill 21 is, first and foremost, an all-out attack on religious minorities who have been victim to so much racism since the debate on reasonable accommodation began 12 years ago. Attacking the right to employment of a few individuals wearing religious symbols has nothing to do with the heroic struggle of the 1960s against the influence of the Catholic religion in Quebec.

In his speech published on Facebook on March 31, Quebec Premier François Legault said: “It’s time to put rules in place because in Quebec, that’s how we live.” The underlying message is clear: the “we” he is talking about is the French-speaking majority in Quebec, and religious minorities must abide by “our” rules. This is what the conservative right-wing columnist Mathieu Bock-Côté explained in an article in which he commented on these words: “In other words: When in Rome, do as the Romans do. And in Quebec, we respect the way of life of Quebeckers. The Islamophobic far-right group La Meute also applauded the CAQ’s bill, saying that “La Meute’s demands are exactly the program of the CAQ and it is on this that [the CAQ] was elected.”

When questioned about what students wearing religious symbols studying to become teachers should do, Legault replied contemptuously, “There are other jobs available.” The CAQ’s measures will create a climate in which the marginalization of Muslim women in particular will be accentuated. Even the grandfather clause (which protects the few current employees wearing religious symbols), which is presented as a compromise, will create a climate of suspicion where anyone who wears a religious sign will be seen as breaking the law, even if it is protected by this clause.

Who benefits from Bill 21?

A question that is never posed in this “debate” on secularism is: what is accomplished with the banning of religious symbols? Who benefits from these measures?

The working class and youth have no interest in depriving religious minorities of their rights. No worker gains from discrimination in hiring aimed at any section of the working class. Divisions on religious, ethnic or other lines undermine the class solidarity necessary to fight back against the bosses.

The CAQ government, however, has every interest in promoting this so-called “debate” on religious symbols and imposing discriminatory measures. This government of the bosses, the most right-wing in Quebec’s recent history, seeks to win the support of a section of the Quebec population by posing as the defender of “Quebec identity” and “Quebec values.” Legault wants to distract us and divide us so that we are weak and will more easily swallow austerity measures when the time comes. What better way to do this than to attack minorities over and over again? While the CAQ may say that the bill is aimed at the religious symbols of all religions, it is religious minorities, and Muslim women in particular, who suffer from the climate of racism and Islamophobia instilled by these measures.

Since this bill was announced, there has been a lot of confusion over how the new rules will be applied. Nothing in the bill indicates that there will be sanctions for those who refuse to comply. However, on April 2, Geneviève Guilbault, minister of public security, said that it would be possible to file a complaint with the police. She was then rebuked by François Legault, who said, “it is surely not (sic) the time to talk about the means that could be used”! Therefore, the government has no idea how it will enforce the law. This is certainly not Legault’s priority, since the bulk of the work is already done: create a climate of division to score political points, all on the back of the Muslim minority in particular. The labour movement must oppose with all its might this divisive discriminatory bill.

The role of the media

Fortunately for Legault and the CAQ, they have been able to count on their friends in the mainstream media to support their bill. And this is not new: for 12 years, the media have carefully nurtured this “debate” on secularism and religious symbols. A lot of small insignificant cases are used to make noise about nothing in order to instill the climate of a crisis. This was one of the main conclusions of the 2008 Bouchard-Taylor report which stated that the “crisis” of reasonable accommodation was primarily a “crisis of perception.” But who has maintained this perception that religious symbols are a threat to “Quebec identity”? Let the Bouchard-Taylor report speak for itself: “The media frenzy and the phenomenon of rumours contributed to the crisis of perception.”

Columnists from the Journal de Montréal and the Journal de Québec played a particularly reactionary role in this process. Almost every day, Mathieu Bock-Côté, Richard Martineau, Lise Ravary, and company scream in our ears about the so-called problem of secularism and religious symbols. They raise the specter of the “return of the religious,” and of Islam in particular.

Bock-Côté, every week, nervously stirs the pot about the threat to Quebec identity, speaking of the “disintegration of identity revealed by the multiplication of ostentatious religious symbols.” He even went so far as to appropriate the term “Catho-secularism,” a term used to refer to those who supposedly defend secularism while accepting Catholic symbols in the state, such as the crucifix in the National Assembly.

This hype is nothing new. In 2010, radio host and author Éric Duhaime said that Amir Khadir, the former Quebec Solidaire MP, had a “hidden Islamic agenda”. In June 2016, when racists left a bleeding pork head in front of the Islamic Cultural Center in Quebec City, all that Duhaime could say is, “How is this is hatred?” Hundreds of similar examples could be easily provided.

In addition to the incessant media propaganda, inflammatory statements from politicians have thrown fuel on fire. For example, Jean-François Lisée in November 2015 asked PQ activists if they would like to have “hijabs everywhere” in the daycare centres, and complained that because of the Liberals, there would be “religious symbols around your child.” During his bid to become PQ leader in 2016, Lisée proposed to open a discussion on banning the burkini, the burqa and niqab in public spaces!

The zeal of the media and politicians has greatly contributed to maintaining a climate of Islamophobia for years, which has resulted in a rise in hate speech and Islamophobic acts in Quebec. The saddest example of these acts is the killing at the Quebec mosque on Jan. 29, 2017.

However, throughout the onslaught of such absurd and reactionary remarks by the media, the PQ, the CAQ or the Liberals, there has almost been no clear opposition on the left. It is in this context that we must understand why a majority of Quebecers are in favour of some form of prohibition of religious symbols.

Fortunately, many unions oppose the CAQ’s discriminatory plans. The central council of the CSN as well as the Central Council of Metropolitan Montreal (CCMM-CSN) took a stand against any ban on the wearing of religious symbols. The Fédération autonome de l’enseignement (Autonomous Teachers’ Federation) and the Fédération des enseignantes et enseignants du Québec (Quebec Teachers Federation) are also opposed to Bill 21. The FTQ Greater Montreal Regional Council also participated in a press conference denouncing the bill.

In addition, at its recent national council meeting, Quebec Solidaire, the only left-wing party in the province, had its delegates vote by a large majority to oppose any ban on religious symbols for state employees. QS becomes the first significant party in Quebec to take this position. Catherine Dorion, QS MNA, said in a speech on March 29: “It is not the Muslims who are everywhere in the corridors with big sacks of cash influencing our governments, it is capitalism that that is in bed with our governments!” This is exactly the type of message that we must be using. We must denounce discrimination and racism, and point to the real culprits of the problems in society—the capitalists and their system. This is the best way to cut across the divisions maintained by the capitalist parties and their media.

For a mass movement of civil disobedience!

Legault made it clear that he does not want to compromise. “It’s been 11 years that we have talked about this subject, I think everything has been said, pretty much everything has been said, in any case, the positions are clear for the four parties, I think it is time that we turn the page,” he said. He even mentioned the use of the gag order to limit parliamentary debate on the issue.

It is clear that this bill cannot be stopped in parliament. The fight will have to be carried out on another front: on the streets and in workplaces. There have already been protests against the bill on April 3, when protesters formed a human chain around a school in Westmount. Two school boards in Montreal, the English Montreal and Lester B. Pearson School Boards, have announced that they are not going to enforce the law. The Association of Suburban Municipalities (which includes 14 municipalities on the Island of Montreal) has also suggested that they could disobey the law.

These initiatives are heading in the right direction. We must extend this movement of disobedience to all municipalities, school boards and unions.

Every trade union which has taken a stand against the CAQ’s discrimination must now turn their words into action and mobilize in defense of religious minorities. We must develop a concrete plan to disobey any attempt to enforce this law. This can take the form of strikes in solidarity with targeted employees or even mass demonstrations. We must not let any of our fellow workers suffer discrimination based on religion or anything else.

The main force which has the power to stop Bill 21 is the organized labour movement. It is time to use the immense resources and mobilizing potential of the unions to stop this first attack of the CAQ against the working class and the oppressed.

An injury to one is an injury all!