Since toppling the 44-year Progressive Conservative dynasty in Alberta, Rachel Notley and the Alberta NDP have been subject to constant and rabid abuse. The Tories and the corporate media have yet to recover from the shock of being robbed of what they thought was their God-given right to rule. The latest anti-NDP craze is around the issue of the recently passed carbon tax legislation. On Saturday November 4th, thousands were mobilized across Alberta by right-wing forces to oppose this legislation.

The opposition parties –Wildrose and the Progressive Conservatives – did not waste any time to use this issue as another stick to beat the NDP. They are opportunistically trying to capitalize on the apprehension of workers in Alberta regarding the tax, especially during this time of economic hardship when any tax is seen as an attack. The Tories and Wildrose suddenly proclaim themselves the champions of the poor, worrying about the “additional burden on families struggling with the province’s economic downturn”. They conveniently forget that it was under the rule of one of their own – Ralph Klein – that the welfare state was dismantled. They hide the fact that they were ready to push through a “once-in-a-generation” budget that would have seen the deepest spending cuts in Alberta since the Klein government. 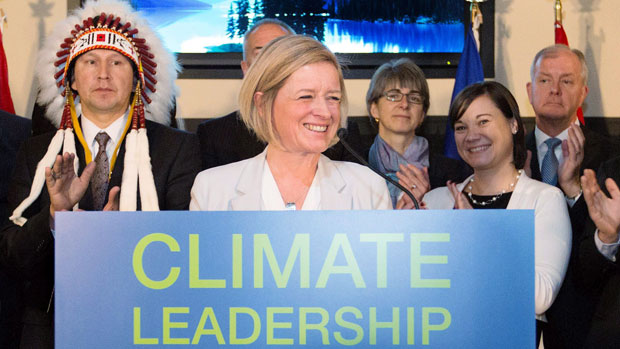 The extent these ladies and gentlemen will go to gain a political foothold is sickening. Some Wildrose MLAs were found comparing the carbon tax to the Stalinist forced collectivization in the 1930s that killed millions of peasants in Ukraine. They whipped up the most reactionary and backward layer of the population and it was not a surprise when a confederate flag turned up at one of the anti-carbon-tax rallies in Red Deer. Wildrose MLA Jason Nixon who spoke at that rally said that he wasn’t impressed and he condemned this racist imagery, but it is precisely his party and the corporate media who have been encouraging reactionary elements in a bid to unseat the NDP and regain their political dominance.

The legislation is supposedly an attempt by the NDP government to tackle climate change. However, as we shall discuss later, this carbon tax legislation leaves a lot to be desired. The carbon tax will increase fuel prices on January 1, 2017. Gasoline prices will jump 4.5 cents per litre, diesel 5.4 cents per litre, propane 3.1 cents per litre, and natural gas $1.01 per gigajoule. Environment Minister Shannon Phillips who introduced the legislation said that this carbon tax will provide an incentive for Albertans to go green and bring in $6.8 billion over the next five years, which will be invested in various green initiatives. As for the direct impact on households, it is estimated to be in the range of $200 to $360 depending on the size of the household. To alleviate this impact on most families the government will send rebate cheques to low- and middle-income households. For example, a single person making less than $51,250 will be eligible for an annual rebate up to $200, while a family of two children making less than $101,500 will get up to $360.

We can agree that there is a dire need to find a solution to an array of environmental problems that we are facing today, but carbon-taxing the workers is not one of them. “The climate is changing. Doing nothing is not an option, we must take a strong and decisive action,” said Alberta Environment Minister Shannon Phillips. But the “strong and decisive action” needed to tackle climate change is not to unload the burden of environmental problems on to the working class. Those who defend this carbon tax legislation will argue that the plan put forward by the Alberta NDP involves a rebate that targets low and middle-income earners. In some respects this is a roundabout way of implementing some form of progressive taxation, as Jason Kenney correctly recognized it as “a wealth redistribution scheme” during his speech in front of a business crowd at the Economic Club of Canada in Calgary. But for workers who have been hit hard by recession the only thing they see is a government reaching deep into their pockets. These roundabout measures have given the Tories plenty of ammunition to attack the NDP.

If the NDP really wants to take “strong and decisive action” to tackle climate change and defend the workers at the same time, they should aim the carbon-tax directly at the oil barons. It is interesting to note that Suncor, one of the biggest oil producers in Alberta, is supportive of this broad-based carbon tax that targets “end users”, i.e. the working class. It is not because the Alberta oil barons suddenly had an epiphany that the wellbeing of the planet should trump over profit. It is a calculated move by the oil barons to shift the financial responsibility of climate change to the workers and thus protect their bottom line.

Can a progressive carbon-tax – one aimed directly at the corporations – solve the environmental crisis? The answer is a resounding no. The reason is two-fold. First, the environmental crisis that we are facing is too big, complex, and urgent to be solved with mere taxation. We need a rationally planned economy, on an international scale, to radically alter production and exchange. The anarchy of the market under capitalism and the profit motive stands in the way of achieving this. Second, we are faced with the inherent limitation of progressive taxation as a demand. While Marxists support progressive taxation, we understand it has serious limitations, especially in times of economic crisis. Those who put forward the demand for progressive taxation also need to be prepared to face the wrath of capital. If big business responds with a capital strike, as they often threaten, we should be ready to take the struggle to the next level. We should respond to their capital strike with a capital “lock-out”, i.e. nationalization and expropriation. Those who only put forward progressive taxation without the readiness to mobilize the workers in the face of a capital strike are bound to capitulate and betray the workers.

Since being in power, the Alberta NDP has been under tremendous pressure. The party is caught between two powerful forces and pulled in two opposite directions. On the one hand there is the working class who put them into power and on the other the oil barons. The interests of these two sides cannot be reconciled – you cannot mix oil and water. This is what the Notley government has attempted, but this is proving to be an impossible feat. The NDP’s carbon tax legislation is one example of such an attempt. It is a roundabout way of dealing with pressing environmental problems without burdening the workers (through its rebate scheme) and offending the oil corporations (through the broad-based tax). The result will be equally roundabout and, as we have seen, it opens itself to attack.

While support for the NDP has eroded since it came to power, it still commands a reserve of support that could be mobilized if only the party stops sitting on the fence between the workers and bosses. Any vacillation on the part of the NDP will not only embolden the ruling classes but also disorient its working class base. In the struggle against the oil barons, their politicians, and their paid media, there is no middle ground. The capitalists have made their intention very clear: to crush the NDP so that it can no longer be the political vehicle for the workers. Only a bold socialist program can bring back the massive support the Alberta NDP won last year during the election, and save the workers from the onslaught of capitalist austerity.