300,000 march in Montreal against tuition hikes: Largest demonstration in Quebec history is only the beginning!

On Thursday, March 22nd, around 300,000 students, teachers, and workers took to the streets of Montreal in a massive demonstration of historic proportions. On that day, 308,723 students were united in a strike across the province. The march was joined by buses from all over Quebec which brought students from universities, CEGEPs, and surprisingly, even a significant contingent from high schools! Workers’ unions, from the metallos to the nurses to the teachers and others, also came out, flying their union flags. This was truly a demonstration by all the working layers of society. Everyone is coming under attack from an economic system in crisis, and this demo was just an outlet for frustrations that go beyond just the tuition increase.

The amazing thing is that the Quebec Liberal government has spent months attempting to belittle the striking students, to claim that they are a minority, and to set up a youth front to organize strike-breakers on the campuses. But, with mass action, the student movement has simply swept this all aside and shown that it is not a “handful of radicals”, but an elemental force. And like a force of nature it flooded down streets. When the crowd got too crowded, one could look a parallel street and note that the protesters were marching on two streets. One participant phoned another to meet in the crowd. This was quickly revealed to be impossible — he was facing Saint-Laurent metro station, and the other was facing Champs-de-Mars, over a kilometre away.  And yet, neither could see the head or the end of the demonstration!

The crowd was very lively, with artists and clowns all around. Musicians drummed and puppeteers, dressed as fat cat capitalists, pulled strings on a giant effigy of Quebec premier Jean Charest. The morale was very high, and the main gain was a very simple lesson for everyone who until now had been working in separate corners — we are not alone! This is a very powerful element, and a great beginning. 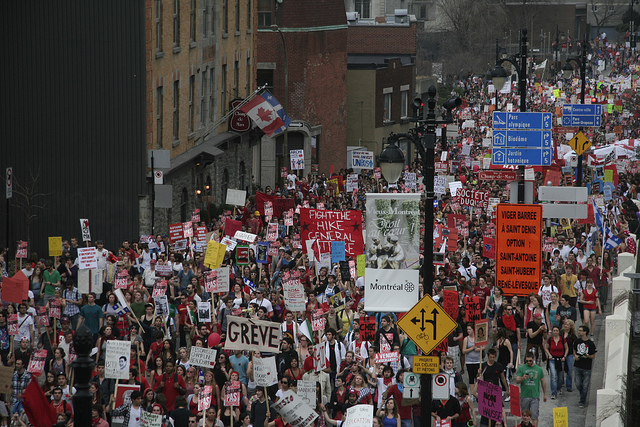 But we need to be thinking also of the next step. One of the best things in the demo was actually outside of it. All along the route, people young and old would come out on their balconies and windows and hang red towels, or red sheets, or red napkins, and wave them at the crowd. There were restaurant workers in the old port waving red napkins. There were the “Just for Laughs” comedy-show workers who came out with a giant banner that read, “Hey you with the red square, will you marry me?” This was also shown earlier in the morning when a group of students blocked the port in old Montreal. Many students had a fear that the workers would be mad that the students were blocking their way. What happened was actually the opposite. The truck drivers showed up with red squares and were chanting, “Students and workers, same struggle!” The support runs deep in the working class, and this is where the real way forward lies.

Despite the energy, size, and militancy of the current movement, students are not able to shut down production when they go on strike — their economic impact is not very great. But, the potential is there; the real force in society was waving its solidarity from the windows. With the introduction of healthcare fees in Quebec, with the attacks on pensions, with the illegalization of strikes in the postal and airline industries, with the riot police gassing the Aveos workers who lost their jobs overnight, this tuition hike is only part of a general attack by the capitalist class. And, a general attack can only be responded to with a one-day general strike which shows society who wields real power in socity — the working-class masses. The time has now come for the CSN, the FTQ, the CSQ, and the CSD to bring the working class into action with the student unions. The trade union leaders must prepare the 24-hour general strike against austerity.