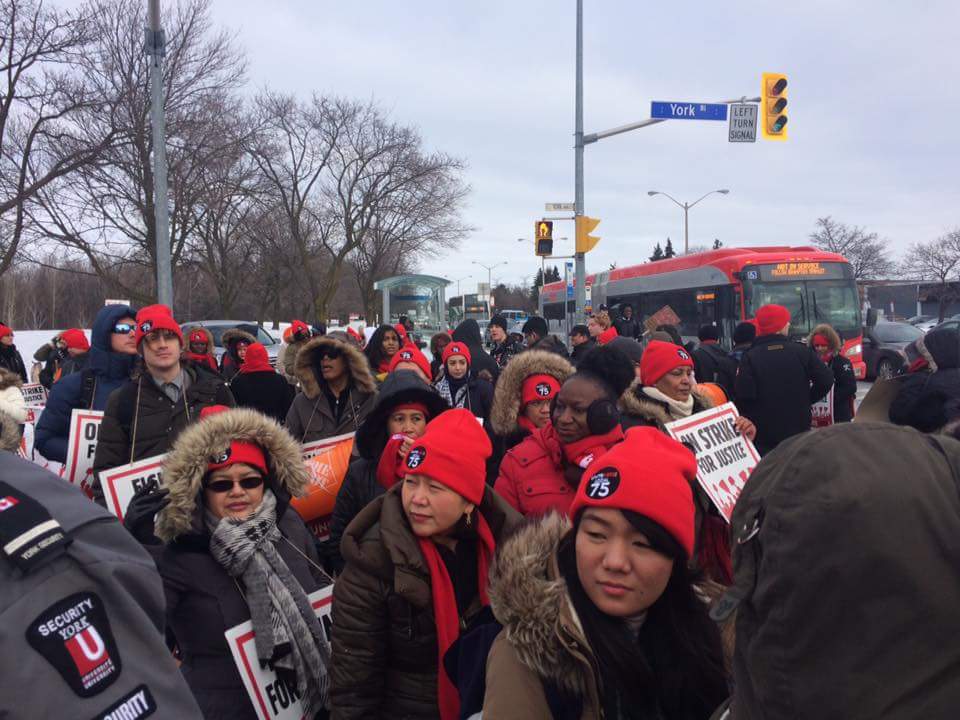 Cafeteria workers at York University began open-ended strike action on February 16th, following on the heels of strike action by their fellow workers at the University of Toronto Scarborough campus, who went out the week before. Labour negotiations with Aramark had been ongoing over the past year with no sign of resolution.

With the management dragging their feet, the approximately 250 food workers at these two campuses felt that they had no choice but to take action to win a living wage and respectable work conditions. The workers took a strike vote with an impressive 100% vote in favour of strike action in the event that the impasse at the bargaining table continued.

One of the central demands of the workers is for an immediate increase of their wages to $15 an hour, with yearly increases during the life of a new contract that would reach $18 after three years. These workers are currently paid a minimum of $12.21 an hour, and there are very few opportunities for pay raises or promotions. Some workers have spent twenty years contracted by Aramark with no opportunity for a pay raise or promotion. The oldest Aramark worker has been there for over thirty years yet still makes less than $14 an hour. This pay cannot sustain a single person, let alone the families that these workers go home to.

Another major point of contention for the workers is their anger at harassment and assault in the workplace. Workers are humiliated and face racism and Islamophobia from management. Years of degrading treatment and poor working conditions have led to a breaking point for the food workers, who feel that they have no choice but to fight back.

Socialist Fightback Students at York University and the University of Toronto commit our unconditional support to these brave workers who are organized in UNITE HERE local 75. We have been actively organizing students in support of their struggle. The struggle against the highly exploitative conditions at Aramark is part of the broader struggle against poverty wages, precarious work, racism, sexism and capitalism.

Aramark’s History of Racism and Abuse 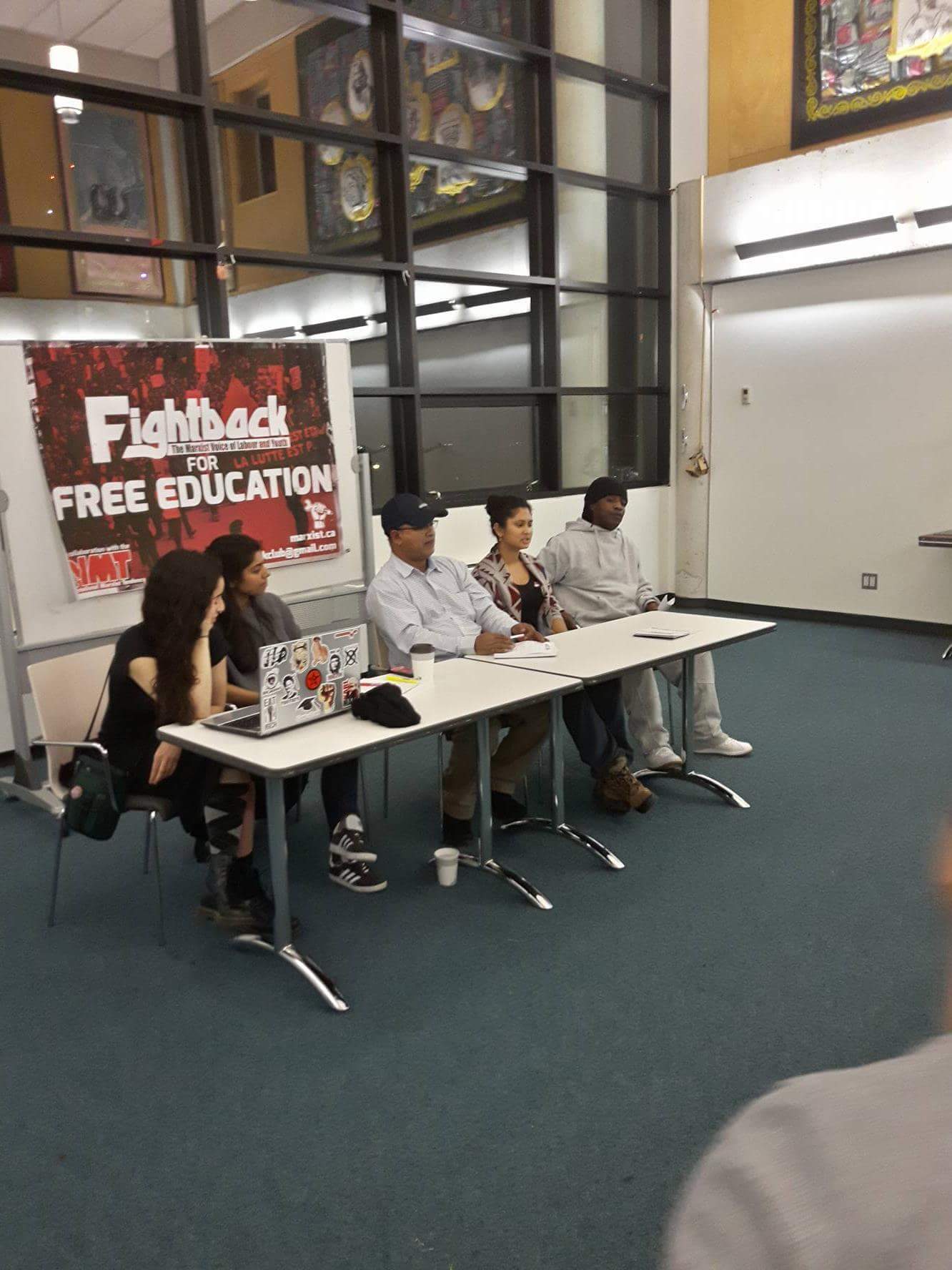 On January 26th, 2017, the Socialist Fightback club at York University hosted a public meeting on the topic of the food workers’ struggle. There were a number of attendees and panelists from amongst the workers, including Melissa Sobers, a rank and file worker at the Rogers Centre, Nigel Blair and  Anthony Seet, who are shop stewards and work at the York campus, and Tefferi Zemene, a UNITE HERE Local 75 organizer. They shared countless stories that highlighted the degrading abuses inflicted on workers by management. The many students who attended the gathering were shocked at the level of racism, bigotry and humiliation used to silence the workers.

One panelist started off by first stating that approximately 90% of the food workers are women, and most of these women have families. To sustain a family on an hourly wage of $12.21 is nearly impossible and most of the workers take on a second or third job. Another panelist explained the dilemma facing workers when trying to use their sick days. They are entitled to ten paid sick days per year but are required to have a doctor’s note which they are reimbursed for. Previously, the note was required after three days but since the contract expired, the rule was reduced to one day. Management added the requirement of a doctor’s report as well, to be presented on the 3 rd day of leave and with no reimbursement. Doctor’s reports cost at least $90, and one woman had to pay $300 for hers.That is almost a week’s worth of wages at full time hours!

There have been multiple instances of workers having been physically assaulted in the workplace. Workers revealed stories of being kicked and pushed by managers. Workers are frequently accused of stealing, even when no goods have been lost.  A worker who was accused of stealing a muffin — the very ones she makes herself every morning — was humiliatingly asked to empty her purse in front of students in Central Square.

In another instance, a pregnant food worker was prevented from taking on full time hours in order to meet requirements for maternity benefits. When she took it to the union and was able to secure the adequate hours, management brought the hammer down on her by intensifying her work responsibilities. When she told management she wanted to start her maternity leave, management told her that she could not do so until she had given birth.

Racism and Islamophobia — the very things we students fight against on this campus — lurk behind closed doors at Aramark-operated facilities. Five black women were suspended from work for five days for allegedly stealing. One worker was told by her manager that she would not get a promotion because of her hijab. In another instance, a manager suggested hiring fewer black people. There are workers who do not speak English, and they become the easiest prey for management who take advantage of the language barrier to deny them their labour rights.

On the York campus, we don’t need to look further than Central Square, William Small Center, Stong College and other places to see who precarious employment, low wages and poor working conditions affect the most. It is mostly racialized men and women who take these jobs. Immigrants, women, and visible minorities face heavy exploitation at a campus that has a supposed reputation for social justice.

The workers and students united will never be defeated! 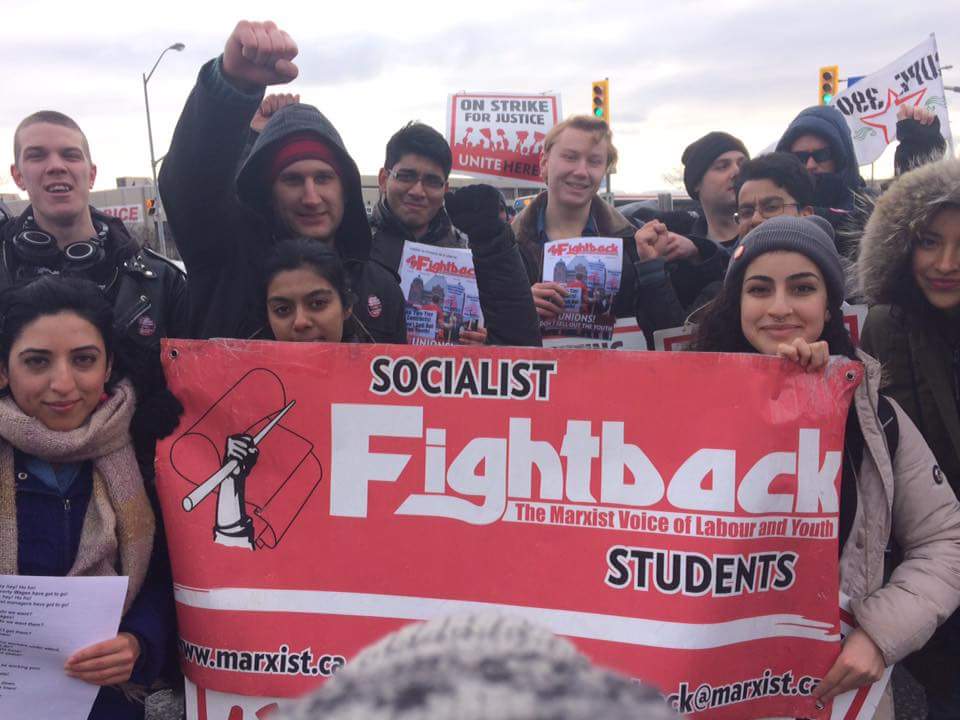 Aramark managers use racism and Islamophobia as tactics to intimidate the workers and to keep them divided. However, this tactic is much more difficult to use on the picket lines. Collective strike action is serving to unite and embolden the workers through common struggle. This shows that that the fight against poverty and exploitation, as well as the fight against racism and sexism are linked directly to the working class struggle.

It is therefore imperative that the student movement come behind this struggle. The student unions and the trade unions on campus must make supporting the strike a priority. It is telling that the York University President Shoukri and the Board of Governors pay lip service to the ideas of equality, safety and non-discrimination in the school environment, while allowing corporations to pursue their profits on the campus, with the negative consequences falling upon food service workers.  In reality it is the university workers, the teaching staff, and the students who uphold the values of equality, solidarity and anti-discrimination on the picket lines, in union meetings and in the classrooms.

Given the conduct of Aramark management, the cafeteria workers have put together a petition calling for the firing of two Aramark managers who were particularly responsible for abuses and discriminatory behaviour. That petition has already been presented to Aramark. This is an absolutely correct demand and the workers should be congratulated for challenging management impunity and abuse. There must be zero tolerance for racist managers.

The only way workers can protect themselves is through strong union organization and a militant approach to protecting their collective interests. The demand to dismiss the abusive management raises broader questions about how food services should be run on campus, and how management should be selected.

If the two abusive managers are fired as a result of the pressure of the workers, this would be an important step forward and a show of strength. However we can be sure that Aramark would try to replace those managers with individuals who would continue to try to undermine the unity, the self-confidence and the union organization of the workers as a means to maximize profit.

There is no reason that corporations should run food services on campus, and there is no reason that the workplace should be run as a dictatorship under the control of the wealthy owners and unaccountable managers. At the end of the day, it is the workers who know their workplace best, and certainly upper management has no sense of the needs of the workplace. Food services should be run under workers and students control and management.

Corporations should be driven out of ownership. The workers and students should unite to operate the food services so that instead of prioritizing the profit-interests of the bosses, the living standards and work conditions of the workers as well as the quality and affordability of the food would be put first. The workers should themselves elect management and the democratic process should include the principle of recall.

A Microcosm of the Capitalist System

The CEO of Aramark, Eric Foss, was paid $32.4 million last year, which is an increase of 44.2% from the previous year. The CEO is making over 1700 times the pay that an average Aramark worker would receive. This type of drastic inequality is not an exception but the rule under capitalism, and it shows the hypocrisy of the upper management’s refusal to give these workers a living wage.

The struggle of the Aramark workers has great relevance for young people and students. Low wages and precarious work is not just a problem for these striking workers but is rather a general problem of the capitalist system today. This affects the youth in particular, including university graduates. Youth unemployment is 13% across the country, which is double the general unemployment rate. Capitalism today means low wages, precarious employment and a life of indebtedness, especially for the youth. The struggle of these brave workers is therefore showing the way forward.

Capitalism is a system based on private ownership and where economic life and decision making is based on the profit-motive. The struggle at Aramark is a clear example of capitalism in action. The company is bringing in a revenue of $14 billion, profits of about $1 billion, while paying its workers a pittance. As companies like Aramark try to maximize their profits, they do so at the expense of pushing down wages and benefits. This means a race to the bottom for all workers.

The Socialist Fightback Club at York University and Seneca College is therefore calling on trade union and student organizations, especially those based on the campus, to support this struggle. We are actively organizing solidarity efforts, including visits to the picket lines, and encourage all those who want to be involved to get in contact with us (socialistfightbackclub@gmail.com) so that we can give the best support possible so that the campus food workers can win this struggle.