Thatcher’s death: We remember her crimes against our class 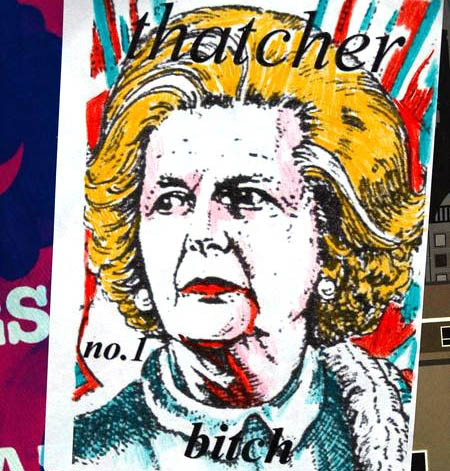 The TV is full of the sycophantic outpourings of right-wing commentators and politicians about the sudden death of Margaret Thatcher. The Establishment has rallied to praise her. The Queen has sent a personal message of condolence to the Thatcher family. The news is full of tributes, portraying Thatcher as some kind of champion of freedom and liberty. Of course, nothing could be further from the truth. She was a champion — a champion of capitalism, the ruling class, and all it represents.

Her death is now being used to “rehabilitate” her, to paint her as a heroine. Of course, Margaret Thatcher is very much admired by representatives of her class, the ladies and gentlemen of the ruling class, as a fervent defender of capitalism, the existing social order, and their class interests. For us, Thatcher represented and epitomized privilege, wealth and the inequality of class society.

While Prime Minister between 1979 and 1990, she epitomized capitalism in the raw. She set about attempting to destroy the power of the trade unions and plunder the state through privatization, all in a vain attempt to restore the position of British capitalism. She attempted to drive the working class back to Victorian times by attacking all those who resisted, especially the miners, as “the enemies within”. Whole swathes of anti-trade union legislation were brought onto the statute book. The right to strike was all but removed.

Gone was the image of One Nation Toryism. The Tory Grandees were pushed aside by the Tory rabble, who bestowed the leadership of the Tory party on Thatcher. She represented a new breed of Tory: the narrow, parvenue outlook of a shopkeepers’ daughter. It reflected the degeneration of British capitalism, which has been in a process of long-term decline.

Her policies, based upon the economic doctrines of monetarism – which simply represented a return to the pre-war balanced budgets – resulted in the destruction of 20% of manufacturing industry between 1979 and 1981. It caused a greater destruction of industry than the German Luftwaffe during the Second World War. This drove up levels of unemployment to over 3 million; meanwhile Norman Tebbit, the Chingford Skinhead, lectured the unemployed to “get on their bike” to seek work.

In 1984-85, she set about attempting to destroy the National Union of Mineworkers and smash the mining industry. Everything was done to starve the miners back to work. Thatcher was hoping for a quick victory, her “industrial Falklands”, but the miners held out for another 12 months. Ultimately, it was only the sabotage of the TUC and Labour leaders that sealed the miners’ fate and handed victory to Thatcher.

As with the memories of 1926, the experience of the 1984-5 strike was burned into the consciousness of the working class. They will never forget and never forgive.

The creed of monetarism (of Thatcherism) elevates greed and egotism to a principle. Its philosophy is that everyone must grab as much as they can, despite the consequences. They should climb the social ladder at the expense of the rest of us. The richest elite are praised to the skies, while the poor are condemned as lazy and indolent. They represent the “undeserving poor”, as the Victorians described them, the “welfare scroungers” as they are described by the Tory press today, who should find non-existent work or be deprived of their benefits. This is the law of the jungle, the law of capitalism, which Thatcher espoused.

She denied “society” and promoted individual selfishness, which epitomized the outlook of the bourgeoisie in this epoch of decline. The market has its high priests, and Thatcher represented one of these apologists. Together with Reagan, her counterpart in the United States, she spearheaded a “counter-revolution” against working people, robbing them of their rights and past gains. She reflected the fact that capitalism in decline could no longer afford the reforms of the past.

For the super rich, the mindless pursuit of wealth and the worship of greed are the over-riding principles. This is their morality, their religion. Of course, this is all hidden behind a moralizing screen of patriotism, freedom and enterprise. This, of course, is the freedom to exploit and enrich themselves at the expense of others. The capitalism system is based upon this, on the search for maximum profits, and the extraction of unpaid labour from the efforts of the working class.

Thatcher represented the Establishment – an Establishment which is now in crisis and is increasingly being discredited: Parliament, Government, the Press, the Police, the Church. One scandal after another, involving businessmen, politicians, police-chiefs and judges, has laid bare the cesspit of corruption that extends to the very top. Under Thatcher’s “democracy”, the police-chiefs were manufacturing evidence against striking miners at Orgreave and Liverpool supporters at Hillsborough. But that was perfectly in order. The means justified the ends.

One expects the fawning of Conservative politicians over Margaret Thatcher, but the Labour leadership, to their shame, also stoop to this level. They view “politics” not as a war between the classes, but as a parliamentary game. They are out of touch from the lives of ordinary working people who have been directly and indirectly affected by Thatcherism.

“She will be remembered as a unique figure”, states Ed Miliband. “She reshaped the politics of a whole generation. She was Britain’s first woman Prime Minister. She moved the centre ground of British politics and was a huge figure on the world stage.”

But all this “shaping” and “moving” was done in the name of True Blue Conservatism and to the detriment of the working class. Ed Miliband went on: “The Labour Party disagreed with much of what she did and she will always remain a controversial figure. But we can disagree and also greatly respect her political achievements and her personal strength.”

And what achievements were these? She made the rich richer and the poor poorer. She destroyed working class communities in the interests of Rent, Interest and Profit.

Shamefully, the Labour Party has announced that it will suspend campaigning in the local elections until further notice following Thatcher’s death. It would have been more appropriate for them to have declared that they will compensate all those miners who were sacked by the Thatcher government while defending their class.

Former Labour prime ministers, Tony Blair and Gordon Brown, have fallen over themselves in praise of the woman despised by millions. Brown put out his this statement: “commemorating Lady Thatcher’s many decades of service to our country”! It would have more correct to say service to the bankers and speculators, the City of London, and the giant monopolies.

Brown went on: “She will be remembered not only for being Britain’s first female Prime Minister and holding the office for 11 years, but also for the determination and resilience with which she carried out all her duties throughout her public life. Even those who disagreed with her never doubted the strength of her convictions and her unwavering belief in Britain’s destiny in the world.”

To make such a statement is to spit in the face of all those who were prepared to stand up to Thatcher and Thatchersism. It is an insult to those who stood by the working class as they faced the Tory onslaught throughout the  1980s and 1990s.

Brown continues: “During our time in Number 10, Sarah and I invited Lady Thatcher to revisit Downing Street and Chequers — something which we know she enjoyed very much.”

Again, this reveals the hobnobbing of the Labour leaders with the Tories, who they regard not as class enemies but as friends. They too “very much enjoyed” the company of this bourgeois Lady.

Tony Blair also issued his tribute. He described Lady Thatcher as “a towering political figure”. He went on: “Very few leaders get to change not only the political landscape of their country but of the world. Margaret was such a leader. Her global impact was vast. And some of the changes she made in Britain were, in certain respects at least, retained by the 1997 Labour government, and came to be implemented by governments around the world.”

Blair was, as he admits, a continuer of Thatcher’s policies. That is why he kept the anti-trade union laws. That’s why he continued the privatizations. That is why he too bowed down before the market. Blair was an agent of capitalism in the ranks of the Labour movement.

Even the ex-left and former home secretary David Blunkett described Thatcher as an “outstanding leader and, as the first woman prime minister in the United Kingdom, a groundbreaking politician.”

Meanwhile, Harriet Harman, the deputy leader of the Labour Party, had the cheek to put out a message: “My condolences to Thatcher family. First woman PM, a towering figure in British politics.”

Many feminists fell for this rubbish that Thatcher as Prime Minister represented progress for women. It was the line of the recent film “The Iron Lady”, where Thatcher was portrayed by Meryl Streep, and who again attempted to justify her role. These people only had to ask the wives of former miners to put them straight. Whether it is a man or woman attacking the working class is completely irrelevant. It is the class interests that are important and not the sex of a politician. For the overwhelming majority of women, especially in the former mining areas destroyed by her government, Thatcher was not a person to look up to but a person to be despised.

It is clear from these remarks that the Labour leadership is a million miles removed from the trade union movement and ordinary workers. We knew Thatcher as our class enemy. We must now cleanse the Labour movement of those who simply use it for their own purposes and careers. The pro-capitalist leaders must be replaced by genuine fighters for the interests of the working class.

The only thing we would say about Thatcher is that she faithfully fought for the interests of her class, however blindly. It is high time we had leaders in our movement who, instead of pandering to the enemy, would faithfully and forcibly represent our class interests, namely, the fight to put an end to capitalism and the establishment of socialism. Only then will we have repaid the debt to all those who fought to the bitter end against Thatcherism and the system it represents.

Margaret Thatcher is dead, the struggle against capitalism continues (by Socialist Appeal – UK)