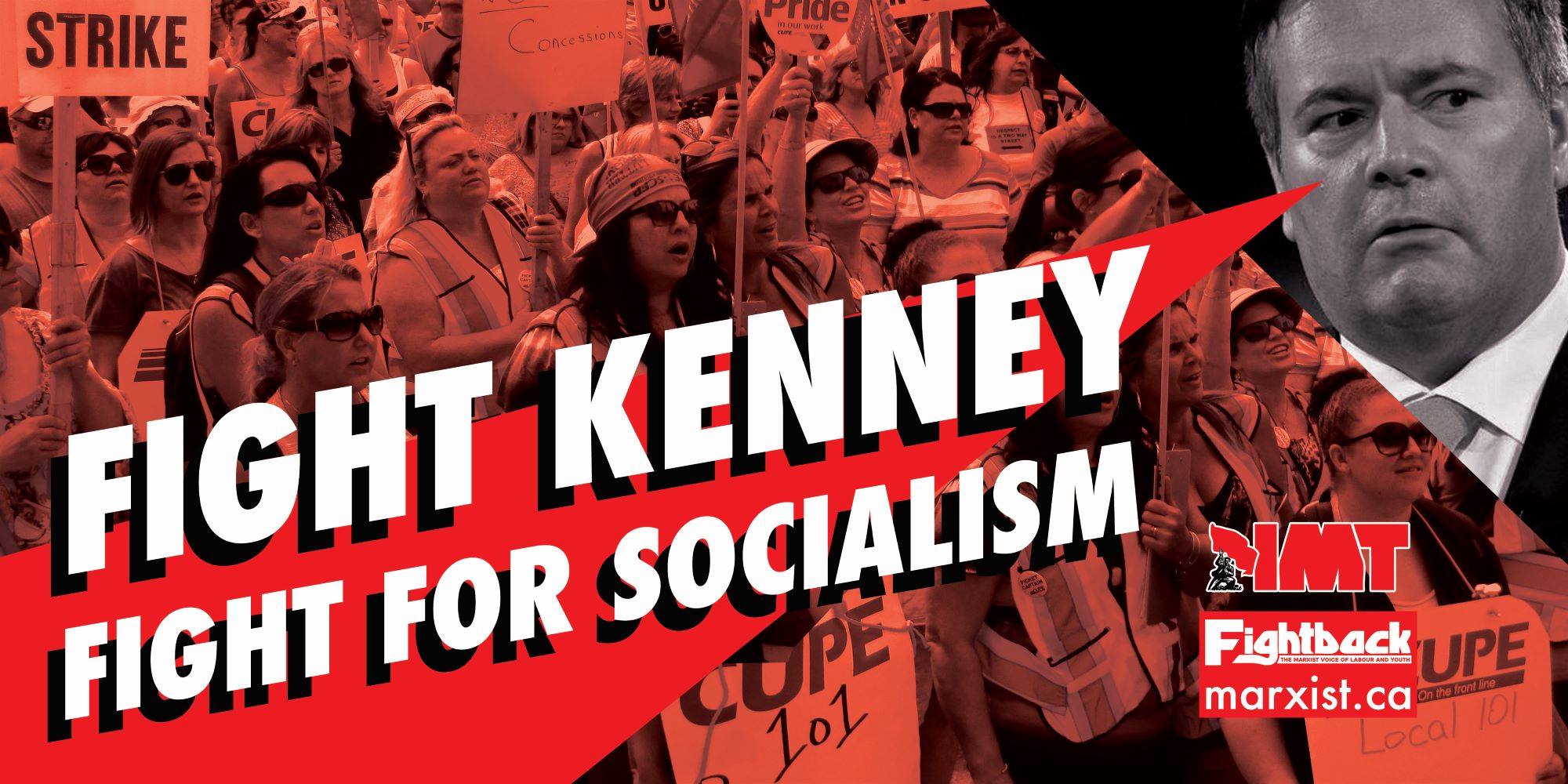 Four years ago, Alberta politics was turned upside down by the victory of the NDP. The Progressive Conservatives not only suffered a humiliating defeat but also entered into a period of prolonged internal crisis. However, in the past year, the divided conservative forces have come together with a new party and sense of confidence. A poll in July put the United Conservative Party (UCP) far ahead of the NDP in electoral support, with 47.5 per cent of Albertans saying they would vote for the UCP and 30.4 per cent for the NDP. Should this poll hold for the coming election in May next year, the Conservatives will return to power.

This prospect worries those youth and workers who rightly see that a victory of the UCP would be a disaster for working Albertans. The new UCP government would not only roll back whatever achievements have been won under the NDP government, but also unload the burden of the capitalist crisis onto workers, which was the original plan of Jim Prentice’s PCs before he was ousted. Yet there is increasing doubt and pessimism that the NDP can defeat the UCP. There is a burning desire to keep Kenney out of power, but also a nagging question that today remains unanswered: How can we fight against Kenney and the UCP? Will the next election spell the end for the first NDP government in the history of Alberta?

What Kenney’s victory would mean

One of the main conquests of the NDP government is the institution of the $15 minimum wage, up from $10.20 an hour when Rachel Notley became premier. More than 300,000 workers who had been working under what can only be termed sub-human poverty wages are now earning about 40 per cent more than they used to. That extra $100-200 per week makes a real difference in workers’ lives. While the UCP as a party has stated that it rules out rolling back the minimum wage should they form government next spring—understanding that saying otherwise right before the election could bring tens of thousands of minimum wage earners marching down to the polling stations to vote against them—the capitalists who make up the UCP social base have vowed that they will not let the issue die and will raise it again. A rollback of the $15 minimum wage remains a distinct possibility with a new Conservative government. But any government trying to undo this historic gain should be forewarned that it will not be achieved without upsetting a few apple carts.

The NDP government has avoided a showdown with the oil barons by shelving their program of oil and gas royalty increases. This means racking up billions of dollars in deficits. In essence, the NDP is merely postponing the central question of today’s politics: who will pay for the crisis, the capitalists or the workers? The UCP has an answer to that question: that it is the workers who will have to dig deep into their pockets. Kenney has made it clear that “a period of austerity would be required if he is elected premier.”

The Health Sciences Association of Alberta, one of the province’s largest health-care unions, has launched a campaign against this threat of austerity, particularly against the looming cuts into the already underfunded health-care system. Its president, Mike Parker, said at the launching of the campaign, “There is no way I can allow right-wing politicians to take a stand at slashing our health-care system without responding to it.” But the health-care system is not going to be the only thing on the UCP’s chopping block.

In the past few years, the NDP government has managed to convince more than 100,000 public sector workers (including 28,000 nurses, 19,000 health-care workers, 46,000 teachers, and 23,000 government workers) to accept a wage-freeze deal with a promise of job security and better compensation once the economy picks up. Collective agreements will be up for negotiation after the election, and should the UCP win they would want deeper cuts. Public sector workers might not even see a wage freeze, let alone job security. A sharp clash is being prepared.

Many other gains, not necessarily economic ones, under the NDP government are also under threat. One of them would be Bill 24, a piece of legislation passed to protect school students in gay-straight alliances by making it illegal for schools to inform parents of youth involvement in them. The Conservatives are wholly opposed to having LGBTQ peer-support student clubs in schools. At the UCP inaugural convention, the party passed a resolution to overturn Bill 24, which would mean creating a hostile and unsafe environment for LBGTQ students and their supporters.

In short, Jason Kenney’s victory would not mean a return of business-as-usual Conservative government. It would not mean a return to the “good old days” of the oil boom in the province. Kenney’s regime would be a vicious austerity regime, out to squeeze the workers to pay for the crisis and also punish them for daring to vote the Conservatives out.

How to fight Kenney

The NDP can no longer rely on a divided conservative movement. The last two by-elections earlier this year make this exceedingly clear. In the Innisfail-Sylvain by-election, the UCP won by capturing 82 per cent of the vote. Meanwhile, the NDP’s vote plummeted from 23 per cent in 2015 to a mere nine per cent. In the Fort McMurray-Conklin by-election, the UCP managed to score a decisive victory by literally uniting the divided votes of the conservative forces. In that fateful 2015 election that saw the departure of a 44-year-old PC dynasty, conservative votes were divided between the PCs and the Wildrose Party, who garnered 22 per cent and 44 per cent of the vote respectively. In 2018, the UCP won this riding with 67 per cent of the votes. Thus we have a glimpse of what could happen in the next election if the NDP does not change course.

In the past few years the NDP leadership have been obsessively trying to compete with the Conservatives on who would make a better cheerleader for the oil and gas businesses, as attested by their fanatical preoccupation with pipelines. Notley and co. have convinced themselves that the way to win over the workers to support the NDP is by winning over the bosses, through the assurance that the NDP government would be nothing but a business-friendly regime. The results of the recent two by-elections mentioned above fly in the face of their plan, yet the top brass have decided to stay the course. By refusing to change course, the NDP leadership are dooming Alberta workers and youth to the austerity program of the UCP. Should the Conservatives return to power, the responsibility will lie with the current NDP leadership.

What is needed to prevent the return of the UCP is a new and bold NDP leadership who dare to challenge the oil barons and implement a socialist program. For instance, further increasing the minimum wage to at least two-thirds of the median wage, which is around $18 per hour, would lift hundreds of thousands of workers out of poverty, especially female workers who make more than 60 per cent of minimum wage earners. The NDP could also expand the $25-a-day childcare program that today only covers a fraction of the families who need affordable child care services to be universal. It would not only financially help working class families, but also give opportunities to tens of thousands of women—who are often saddled with the child-rearing tasks—to work, study, and pursue their own personal development. It would be a massive advance for the women’s movement. A program of free education for post-secondary students would free youth from decades of student debt burden. Such immediate, practical and concrete programs that directly touch the life of the working class—especially youth and women workers who often bear the biggest brunt of the crisis—would inspire genuine confidence in the party amongst the workers.

But the struggle against Kenney cannot be limited to the electoral plane. If Kenney wins at the ballot box, the struggle must shift to the streets and workplaces using methods of mass action. Trade unions and community organizations should immediately initiate grassroots mobilizations to bring together youth and workers. Meetings and forums should be held across the province to discuss how to fight the UCP and their program of austerity. Mass province-wide or city-wide rallies should be organized to galvanize and grow the movement against the UCP.

Public sector workers, now that they have won the right to strike, should be prepared for job actions as they would be the first to be attacked by the UCP government. But public sector unions cannot win if they negotiate separately. Workers’ strength lies in unity, and a common front of all public sector workers would be a force to be reckoned with. This unity should be expanded to the wider working class, with the unions taking the lead in the struggle for an increased minimum wage, universal child care—starting with the immediate expansion of the $25-a-day childcare program to everyone—and Pharmacare amongst other demands. This joint struggle will weld together all the workers in the fight against Kenney.

In the final analysis, what is needed to fight Kenney is working class mass actions with a socialist platform. Standing behind the UCP are the oil barons whose interests in maximizing profits will always run against the workers’ interest for a humane existence. The return of the bosses’ political representatives to the government would spell a disaster for the workers. It is time to organize a fightback movement against the UCP.

Defeat the UCP and their oil baron masters!

All out against Kenney at the ballot, on the streets and in the workplace!

For a socialist NDP—make the bosses pay!