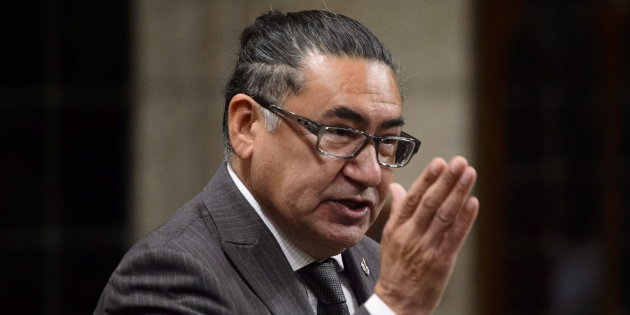 Cree NDP MP Romeo Saganash recently made headlines for his declaration in Parliament that Prime Minister Justin Trudeau “doesn’t give a fuck” about the rights of Indigenous people. His declamation came in response to Trudeau’s commitment to build the Trans Mountain pipeline “no matter what”, as well as government statements that it, “will not be able to accommodate all Indigenous concerns.”

On Oct. 11, the Supreme Court of Canada made a compelling case that Saganash’s comment accurately describes not only Trudeau, but the official legal position of the Canadian government. In a 7-2 decision, the Supreme Court ruled that federal lawmakers do not have a duty to consult with Indigenous people before introducing legislation that could affect their constitutionally protected treaty rights. The ruling came as a defeat for the Mikisew Cree First Nation in Alberta, which had originally challenged two pieces of omnibus legislation introduced by the federal Conservative government in 2012. These bills allowed oil companies and others to build near waterways without the requirement of government approval, thereby threatening the environment and the Mikisew’s rights to hunt, trap and fish on the land. The Mikisew were not consulted on either law, and brought an application for judicial review to the Federal Court, arguing that the Crown had a duty to consult them in bringing forward legislation that affected their treaty rights.

With this ruling, the Supreme Court has torn off the benevolent mask of reconciliation worn by the Canadian government in recent years. In doing so, the court has underscored the continuity between Trudeau’s government, his Conservative predecessor Stephen Harper, and all previous Canadian governments. Despite Harper’s official apology for the residential schools, and Trudeau’s promise to “fully implement the Calls to Action of the Truth and Reconciliation Commission, starting with the implementation of the United Nations Declaration on the Rights of Indigenous Peoples”—documents that stress the need for consultation based on the “free, prior and informed consent of Indigenous peoples”—the federal government has made its priorities clear. It will do what it wants, the rights of Indigenous communities be damned. Where the duty to consult is concerned, the Supreme Court has declared that Indigenous people have no rights which federal lawmakers are bound to respect.

During the 2015 federal election, Trudeau pledged that a Liberal government would engage with Indigenous Peoples on a “nation-to-nation” basis. His comments after the publication of the final report by the Truth and Reconciliation Commission further suggested that the federal government would take a new approach towards its relationship with Indigenous Peoples. This promise played no small part in contributing to the progressive image that carried Trudeau and the Liberals to victory. However, once in power, the Trudeau Liberals revealed their true face. In June 2016, Justice Minister Jody Wilson-Raybould declared that adopting the UN Declaration on the Rights of Indigenous Peoples into Canadian law was “unworkable”. To be sure, the Supreme Court’s decision only says openly what has always been the de facto position of the Trudeau government and its predecessors stretching back to Confederation.

More recently, the Trudeau government purchased the Trans Mountain pipeline from Kinder Morgan for at least $4.5 billion. Trudeau has championed the pipeline over the express opposition of 150 First Nations who have signed the Treaty Alliance Against Tar Sands Expansion and pledged to stop the Trans Mountain expansion, along with other pipeline infrastructure projects through their land. The Secwepemcul’ecw Assembly released a statement calling Canada’s bailout of Trans Mountain a “declaration of war” against Indigenous Peoples. In 2015, Trudeau promised that “no” from First Nations on pipeline projects such as Trans Mountain would “absolutely” mean no under his government. Now we see what such promises are worth, when confronted by the interests of the oil barons.

The very real prospect of Indigenous resistance to the pipeline expansion has led bourgeois economists to describe the purchase of Trans Mountain as a “high-risk investment” for the Canadian government. If necessary, Trudeau will have no compunction about sending in the police and the military to crush anyone who might prevent construction of the pipeline. During the Oka Crisis of 1990, the Canadian government did not hesitate to deploy the army against Mohawk people to secure the construction of a private golf course. With the state now spending billions of dollars to purchase the Trans Mountain pipeline, we can be sure it will be even more prepared to use armed force to protect its investment!

The continuity across time and political parties when it comes to the Canadian government’s attitude toward Indigenous people can only be fully understood with a Marxist explanation of the nature of the state. Like any state, the Canadian state represents the interests of its ruling class—in this case, the Canadian capitalist class. By their very nature, capitalists are driven by the pursuit of profit above all other considerations. Colonial policies in the century after Confederation, such as the horrific residential school system, reflected the desire of the Canadian bourgeoisie to rid themselves of the obstacle that—in their view—Indigenous people, with their land and treaty rights, posed to their drive for expansion and economic development in the name of private profit.

Despite the state’s renunciation of racism today, its apology for the residential schools, and its supposed support for reconciliation, the state still functions in the interests of the ruling class, and in opposition to the interests of Indigenous people. The latest ruling of the Supreme Court shows this. A capitalist government will not guarantee the land and treaty rights of Indigenous people as soon as those rights interfere with the drive for profit. This includes the judicial branch.

In August, a ruling by the Federal Court fueled illusions that the judiciary could effectively serve as one of the “checks and balances” so often held up as a positive feature of bourgeois democracy, after it temporarily suspended the Trans Mountain expansion. The court had ruled that the National Energy Board, in approving the project, had not considered the impact on marine ecosystems of increased tanker traffic, and that the Liberal government had not adequately consulted affected First Nations. The latest ruling of the Supreme Court makes it clear that we cannot depend on the judiciary to defend Indigenous land and treaty rights. There is only one force that can be effectively opposed to that of the state, and that is the organized working class and oppressed.