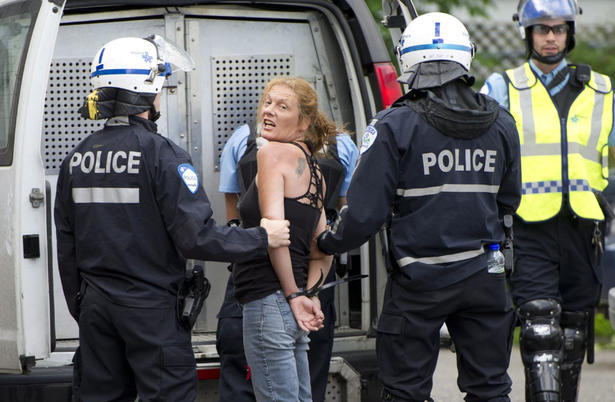 The numerous arrests during the festivities associated with the Grand Prix in Montreal launch a new stage in the police repression of the Quebec student strike, which has lasted for more than 120 days (as of the writing of this article). For the four days of these festivities, more than 130 people were arrested. More important than the number of arrested was the way in which these arrests were carried out.

On the Sunday of the Formula One weekend, 34 people were intercepted and detained for the duration of the race, and close to another 50 were stopped and forced to leave and get back on the metro system. These “preventive arrests” have become frequent evidence of increased repression against a movement that is becoming more and more popular. Since the beginning of the conflict, the political elites have attempted to stigmatize the students, and in a more general manner, all those who oppose the tuition increases. From demagogic speeches and discourse associating the red square with violence, we’ve now passed to direct violence against those who carry this symbol.

Throughout the festivities, the demonstrators came to voice their displeasure with the attitude of the government. This challenge has been gaining more and more of the population to their side despite the government’s attempted imposition of Law 78, which has been denounced by a grand majority of the population. The reaction of the police, who have not hesitated to pepper-spray protestors and tourists alike, has polarized many people who no longer hesitate to boo the police and chant slogans. Two times throughout the Grand Prix, the Montreal police were forced to use the hated Sûreté du Québec (SQ — the provincial police force) to quell the protests. Downtown Montreal had the air of a civil war.

In the days following the Grand Prix, hundreds of complaints of harassment, arbitrary arrest, and wrongful targeting were made by members of the CLASSE (Coalition large pour une solidarité syndicale étudiante), the most significant of the student unions in Quebec. As well, the League of Rights and Freedoms of Quebec and the Canadian Civil Liberties Association denounced the “preventative arrests” that had occurred. The CLASSE is now demanding for an independent investigation into the actions of the police officers. The chief of the Montreal police (the SPVM) has come out publicly defending the use of political profiling. Many witnesses (including many videos) show that profiling is a common and systematic policy during this conflict. Two journalists from the well known newspaper Le Devoir, Catherine Dallaire and Raphaël Dallaire-Ferland, looked into whether this political profiling was as real as the students had been claiming. They did this by posing as students, donning the red square.  Indeed, they had hardly gotten on the metro before they were stopped and interrogated by the SPVM; they wrote an article on their arbitrary arrest and detention titled, “Red squares, your papers”. Throughout this conflict there have already been other journalists who have been arrested with more or less the same arbitrary reasoning. One journalist from Concordia University Television (CUTV) was arrested on 5th April, as well as two La Presse journalists on 13th April.

These “preventative arrests” are, in fact, arbitrary detentions made in order to offset the potential of the demonstrations and to incite fear. The intended effect, beyond an attack on our fundamental freedoms, is to annihilate any desire to exercise our right of protest against what we disagree with. There are many parallels in today’s struggle to the repression faced during the infamous October Crisis of 1970.

The repression has only increased as the student movement has progressed and grown in size, winning more sympathizers from the broader layers of society. The recent casserole protests clearly show this. More and more people have shown their solidarity with the movement, which first started as a student movement with demands focused on the tuition increases. But now, it has spread far beyond that to be part of the global protest movement against capitalist austerity. This repression actually shows that the government is afraid of this movement and its potential. Since the conflict began, the supporters of La Riposte and Fightback have continued to show that the student movement is the beginning of a much broader movement to challenge the entire system. We see this movement now at work.

The events that have transpired during the Grand Prix in Montreal have clearly shown the true nature of the state, which does not hesitate to implement vicious repression to safeguard the interests of the economic elites and maintain the present system. It is when the economic interests of big business is threatened that the repression is the strongest. The Grand Prix shows very clearly that common good cannot be thought of without understanding the essential conflict between the majority who have only what it can spend and the minority who take everything. The following words spoken by a Montreal police officer, reported in Le Devoir, tells us volumes about the true nature of what happened on this weekend: “Today is a private place open to the public.” The bottom line is for the bosses is that there is no room for political dissent in the smooth running of the merchant circus.

This article first appeared on our French-language website, La Riposte.