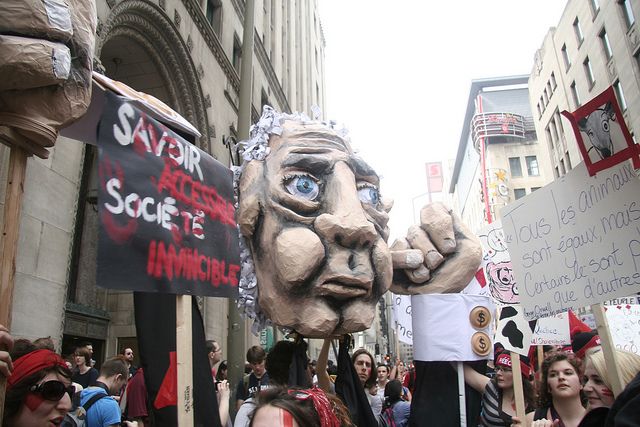 As this article goes to print, the Quebec student strike is in its 11th week. All of the efforts by the Jean Charest government to derail and divide the student movement have so far failed, and generally have served to further ignite the flame and spread the indignation to the rest of the population. The vitriolic media campaign unleashed over the supposed “violence” of the students has failed; meanwhile, the government refuses to condemn the brutality and mass indiscriminate arrests by the police forces.

On Sunday, 22 April, we witnessed another massive demo of over 200,000 people in the streets of Montreal.  Ostensibly, this was supposed to be a “non-political gathering” organized by Quebecor, the media conglomerate, to commemorate “Jour de la Terre” (Earth Day).  Organizers were caught off guard when this gathering turned into a massive anti-Charest rally.  Most of the participants were wearing red squares, the symbol of the student movement.  Even the environmental slogans for Earth Day were aimed against Charest and the Liberal government’s Plan Nord, a scheme that would shower multinational companies with subsidies and tax breaks so that they can pillage resources in northern Quebec without any consideration for the indigenous population living there.  All of the main trade unions had a presence there, with the locked-out workers of Rio Tinto Alcan taking a prominent place.  Any attempts by the organizers to steer the direction of the demo down safe lines failed; one quick look at the placards revealed anti-tuition hike, anti-Plan Nord, and anti-Charest slogans everywhere.

The government’s most recent actions have centred on imposing injunctions across the province, wherever mass pickets have closed down campuses.  The injunctions have instructed administrations to not respect strike votes and to hold classes in any case.  Despite the mass police and judicial repression, not one of the injunctions has been successful.  At the Université de Montréal (UdeM), while the picket lines were no longer officially “hard”, classes ended up being cancelled anyways since there were not enough teachers and students to run them.  This is an important ideological victory for the students at UdeM — the students effectively stopped classes largely because of the political majority they command, and because of the important solidarity they received from the teachers.

The scope of the repression by the police is almost unheard of in Quebec — one would have to go back 40 years to see anything of this magnitude.  Over the course of one week alone, we saw upwards of 600 arrests at various campuses and demonstrations.  At the Université du Québec à Outaouais (UQO) on 19th April, the police broke the picket lines and locked the students out of the campus.  A few hundred students soon arrived on buses to demonstrate in solidarity with their brothers and sisters. Teachers soon joined, as well.  The police unleashed brutal repression on them with a few students and professors left bloody from baton hits to the head.  The demonstration of around 800 students then held a mass assembly and decided to march on the police lines and reclaim the university. They marched on the police, beating them back and they managed to reclaim the university for a short period of time before more police forces were called in and mass arrests commenced.  Approximately 300 ended up arrested at UQO.

The following day, thousands more turned up to demonstrate at Jean Charest’s speech at the Palais de Congrés in downtown Montreal.  Charest was scheduled to speak about his famed Plan Nord.  The situation quickly degenerated as emotions ran high and police commenced with repression of the demonstration.  The scene got worse when it became known that Charest had made a quip, telling the gathered businesspeople, “We could offer them (the striking students) a job… in the North, as far as possible.”  The protest penetrated police lines and a sizeable group of protesters managed to break into the building itself and got within one floor of the meeting of business leaders that Charest was speaking to. They were soon expelled from the building by police forces and a riot ensued outside. The police, having enflamed the situation, lost complete control; the following day, they were seen on the news running from the protest as demonstrators shouted, “MOVE! MOVE!” and showered them with projectiles. The following day, another 60 people, including many indigenous people who had come to protest the Plan Nord, were also arrested. And education minister Line Beauchamp has the gall to demand the students to denounce violence!

Despite all of the government’s attempts, and despite the fact that the end of the school semester is almost here, the student strike has not been crushed nor has it fizzled out as hoped.  In fact, it has only grown larger as another 11,000 students have recently voted to join the unlimited strike.  Over 180,000 students are now out on strike, the highest number to date!  Combined with the massive demonstration on Sunday, this clearly shows that there is still mass support for the student movement amongst society as a whole.  In particular, the teachers have been expressing strong support for the students.  In March, 1,300 professors signed a declaration in solidarity with the student struggle.  In the past few weeks there have been demonstrations of hundreds held by teachers supporting the movement. After the injunctions were issued against “anyone disrupting the functioning of the university”, a group of teachers from UdeM marched into the police station and turned themselves in because they said they did not plan on teaching and would therefore not be adhering to the injunction.

To date, and in spite of the immense pressure coming from the movement, the government continues to refuse to stand back from the tuition increase.  The students have done everything they can.  What is now needed is to spread the struggle further into the rest of society, and in particular into the working class. The issue of raising tuition fees cannot be viewed as separate from the general program of austerity being unleashed by governments and the capitalists around the globe.  Quebec is not fundamentally different.  In the past few years, we have witnessed lockouts at Petro Canada, Le Journal de Montréal, and most recently, at Rio Tinto Alcan.  We have seen mass factory closures in the garment and manufacturing industries, such as the recent closings at Aveos and Mabe.  Even the state violence is not limited to students; in recent weeks, the police also attacked and tear-gassed protesting Aveos workers.  Back-to-work legislation has been imposed on striking workers at Canada Post and Air Canada.

An injury to one is an injury to all!  The government and the bosses benefit from these struggles remaining separate. The workers hold the power to shut down production and force the government to negotiate this question. The student leaders need to approach the workers’ movement, to bring them into a common struggle against capitalist austerity.  The students also need to organize solidarity delegations to workplaces to have face-to-face discussions with workers — to encourage them to come out in support of the struggle for free education.  On their part, the trade union federations need to see the student movement as an additional front of their own war against cuts and attacks, and prepare meetings and mobilization for a 24-hour general strike against austerity and for free education.