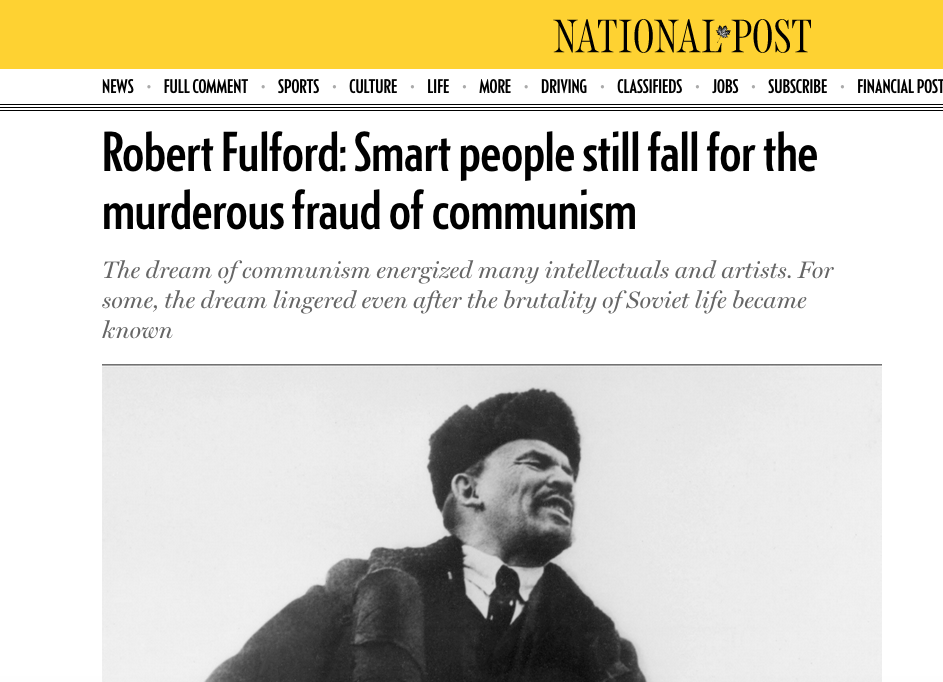 The following is a reply to “Smart people still fall for the murderous fraud of communism” by Robert Fulford in the National Post. You can read his article here: http://nationalpost.com/opinion/robert-fulford-smart-people-still-fall-for-the-murderous-fraud-of-communism

In a largely substanceless piece filled with tired myths about the Soviet Union, Robert Fulford of the National Post puzzles over the fact that “smart people” continue to be drawn to communism. He supposes that the imaginations of smart leftists are captured by the promise of a well-intentioned political system, but fail to acknowledge the reality of communism. While it certainly is the case that many on the left approach communism idealistically, the real driving force behind the continued appeal of communism is the facts: what capitalism has wrought in the world, and what a planned economy has and can accomplish.

Fulford hammers on the death toll in the Soviet Union. If the United States, or any other capitalist power, was held to the same standard, the death toll of capitalism would figure much higher. It is due to capitalism that people are denied life saving care for the sake of profit, that poor and minority communities are harassed by police, that cities are left without drinking water or without disaster relief for the sake of profit. And that’s just on the domestic front. How many wars have been waged, how many dictators installed, and how much blood spilled to maintain the dominance of capitalism in the world?

But more to the point – what did the Bolshevik Revolution actually accomplish in the Soviet Union? Contrary to what Fulford writes, “an inhuman hellhole” more accurately describes Russia prior to 1917. Tsarist Russia was the despotic backwater of Europe, with an 80% illiteracy rate and a peasant population that still mostly used wooden plows. Women needed an internal passport to live away from their husbands, national minorities could not be educated in their language, and bloody pogroms were instigated by the state and supported by those in power, up to and including Tsar Nicholas II.

All this was swept away by the Bolshevik Revolution, led by Lenin and Trotsky. Almost immediately, full legal rights were awarded to women, Jews, national, religious and sexual (same sex relations were decriminalized in 1918, and same sex marriage became legal in 1922). Efforts were made to bring people from all walks of life into the running of the state. Contrary to what Fulford asserts, communism was not imposed against human nature, but was striven for by the masses. It was only after the failure of the Provisional Government to deliver on the promises of the February Revolution, for “Peace, Land, and Bread,” that the Russian people turned en masse to the Bolsheviks.

The masses also demonstrated their support for the Revolution in a far more vital way, by enlisting in the Red Army and giving their lives in the Russian Civil War. No sooner was the door closed on World War I, than the great powers, both Allied and Entente, were uniting in their common interest, the interest of capital, to invade the young Soviet Republic and crush the workers’ revolution. Wherever the White Army went they left destruction and atrocities in their wake. As United States General Graves (no friend to the Bolsheviks) described, “I am well on the side of safety when I say that the anti-Bolsheviks killed one hundred people in Eastern Siberia, to every one killed by the Bolsheviks.” It was only the determination of Soviet people that beat back the fascist White Army. However, the devastation and exhaustion that followed the Civil War laid the groundwork for what was to follow.

Stalinism was not the natural conclusion of the October revolution. Rather, it was the attempt of an isolated and privileged bureaucracy to maintain its power, using the language of revolution, in a country with a materially deprived population that did not have the education, energy or resources to overthrow their government again. The fact that the first prisoners of the gulags were other communists, including the Old Bolsheviks, should be enough to show the gulf between the traditions of Bolshevism and the Stalinist bureaucracy. The goal of the communist revolution is not to install an “ardent revolutionary” in power, or even a whole caste of them, as Fulford (and Bakunin) suggest. Rather, it is to put the working class in charge of their their own fate. As Trotsky explained, socialism needs democracy as the human body needs oxygen. It was not due to the inherent failings of Marxism, or any original sin on the part of Lenin, that this goal was unrealized, but rather the material deprivation that existed in Russia at the time, in no small part due to the efforts of the capitalist powers.

Despite all this, there was one major gain of the Revolution that survived: the planned economy. The levers of the Soviet economy were no longer in the hands of the capitalists, and could be used in a rational manner, rather than one driven by the profit motive. It was on this basis that productivity and growth in the USSR skyrocketed, figuratively and literally, beyond Western Europe and the United States, transforming a peasant backwater into a world superpower. For instance, between 1913 and and 1963, productivity of labour rose 73 percent in Britain, 332 percent in the USA, and 1310 percent in the USSR.

Fulford also repeats the accusation that it was “communism” that led to the famine in Ukraine, sometimes referred to as the “Holodomor.” There is no question that a horrific famine took place in Ukraine under the Stalinist regime. But why did it happen? Communism wasn’t the reason the famine happened. It happened because of the policies and actions of the Stalinists. Lenin always approached the peasantry with the utmost care, as they were the majority in the former Russian Empire. While the Bolsheviks had their own plan for agrarian reform after the revolution, they implemented that of the Social Revolutionaries, the party of the peasantry, instead, recognizing the need to earn their support. It was Lenin and the Bolsheviks who lifted the Tsarist restrictions on the Ukrainian language and cultural organizing, that allowed for the creation of Ukrainian schools and libraries, and  who recognized the right to self determination for national minorities. Without the support of the peasantry, especially in Ukraine, the Red Army would not have won the Civil War. The policy of forced collectivization, and the seizure of food that followed, had nothing to do with Marxism or the policies of Lenin. The policy of Lenin and Trotsky was always that of voluntary collectivization of the peasantry. The idea of forcing peasants to collectivize at bayonet point would have been treated with scorn by them, and rightly so. Stalinist policies in general had nothing to do with Marxism or communism, but were the result of shortsighted zig-zagging to protect the interests of the bureaucracy, using the language of Marxism to justify every turn.

It is rankest hypocrisy to use Ukraine’s dead to attack communism while ignoring what capitalism has done to the country. The “free market” has brought  gangster oligarchs to power, impoverished the people, and all but split it apart for the sake of an international chess game between the West and Russia. The same goes for Russia itself.  After the fall of the USSR, life expectancy plummeted by four years, the percentage of the population living in extreme poverty went from 4 per cent to 32 per cent, and alcoholism shot up. It is now one of the worst countries in the world for sex trafficking. In Russia it is legal for men to beat their wives, and any positive depiction of homosexuality is outlawed. Journalists are regularly murdered, protests are repressed, and even The Economist refers to Putin as a new tsar. Life today in capitalist Russia is so awful that in a recent poll, over 50 per cent of Russians said they believe that the collapse of the Soviet Union was a bad thing.

That is what capitalism has to offer. A system that enriches a privileged few off the blood and sweat of the workers, and which represses any threat of real change. This is what exists in every capitalist country, with greater or lesser degrees of window dressing. The fact that capitalism is fundamentally exploitative, and offers no real hope of improving people’s lives, is what actually accounts for the continued appeal of communism. And not just among the artists and intellectuals that Fulford considers “smart”. Youth today face skyrocketing tuition fees, impossibly expensive housing, and a lack of decent jobs. Capitalism isn’t working for many young workers and students today. Increasing numbers of workers and youth (over a third of Americans 18 to 29 have a favourable opinion of socialism) are turning to Marxist ideas, because capitalism has failed them in their daily lives. That number will continue to grow, not just because communism is a “good idea”, but because it is the only idea that can end the horror of capitalism once and for all.