Fight Trump and the G7! 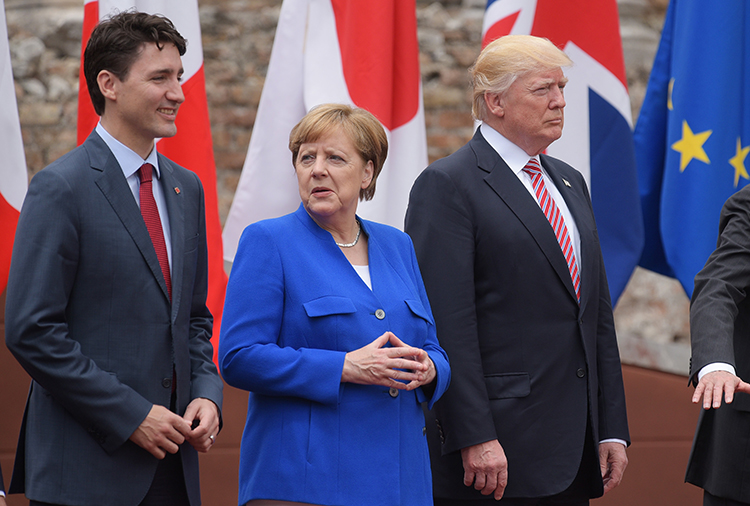 On June 8th and 9th, the G7 will meet in the small town of La Malbaie, Quebec. For this occasion, our Prime Minister, Justin Trudeau will welcome United States President, Donald Trump, into the country for the first time. This racist, misogynist billionaire will be united with Trudeau and leaders from five of the most powerful capitalist nations on the face of the planet to make decisions that will have a direct impact on the lives of billions of poor people around the world. In this situation, Trudeau has the audacity to promise a “progressive agenda” for this meeting with Trump and the other leaders of major capitalist powers! It is clear that whatever decisions come out of the G7, the results will not be in our favour. It will be the workers and youth who will pay and it is therefore our duty to fight the G7 as a part of our struggle against the capitalist system in general.

Trump is not welcome!

Trump, who won the US presidential election by pretending to fight for the “little guy” has now clearly shown who he is really fighting for. His tax plan was a giant gift for American corporations. He has also reduced government spending in all departments, with the exception of the military, which was handed a massive increase.

Internationally, Trump has been exacerbating global conflicts. Whether threatening to annihilate North Korea with “Fire and Fury” or openly sanctioning the oppression of Palestinians by recognizing Jerusalem as the capital of Israel, this egocentric megalomaniac has become well known for his xenophobic comments and his reactionary policies.

Not surprisingly, seven out of ten Canadians have a negative view of Trump’s first year in the White House, and only 13% of the population view it positively. The mainstream media are already beginning to echo the fear of bourgeois politicians and capitalists as his visit approaches. A columnist at the Toronto Star said on January 18, “We may be regularly disgusted by Trump, but he is the duly-elected leader of our neighbour and our most important trade and security partner. He is a G7 leader. Vladimir Putin was booted from the then G8 after he invaded and annexed the Crimea so until Trump is convicted of a war crime, another felony or invades Mexico, he remains a key leader in the summit and eligible to enter this country.”

Trump recently canceled his visit to the new US embassy in London, claiming this was because he disagreed with Obama’s “bad deal” of selling the old embassy and buying a new one for $1 billion USD. In reality, Trump refused to visit the UK because he knew he would be greeted by hostile demonstrations. London Mayor Sadiq Khan said Trump had, “got the message,” that, “many Londoners had made it clear that Donald Trump was not welcome.” This is a sign of weakness. This demonstrates that Trump is not all-powerful, and that he can be stopped. Workers and youth in Quebec have great traditions of mass mobilizations, as we have seen in recent years, particularly in 2012 and 2015. We have to mobilize now to show that Trump and his politics will not be allowed!

As well, many other “great leaders” from liberal “democracies” will meet at the Fairmont Manoir Richelieu. Our future is clearly in good hands at this meeting. German chancellor Angela Merkel is notable for her role in completely crushing the Greek workers, forcing them to accept a program of brutal austerity measures. She has done a good job for the capitalists: she saved the profits of the German banks who possessed a large percentage of the Greek debt. Merkel also violently repressed protests against the G20 in Hamburg last July.

British prime minister Theresa May remains in power thanks to the support of the Democratic Unionist Party (DUP) of Northern Ireland, a far-right party whose former leader was anti-Catholic, “pro-life”, anti-gay and generally reactionary. May was happy to give a billion pounds to the DUP to spend on Northern Ireland, in order to secure their support. Meanwhile, austerity continues in the United Kingdom as May guts the National Health Service. While the Conservative government pushes corporate tax cuts, they have not a penny for the poor victims of the Grenfell Tower fire, while four out of five families still do not have a new permanent residence. May will come to La Malbaie as a representative of a government in the service of the capitalists. She will not be looking out for what is best for workers and youth, that is for sure.

But surely Macron, the “moderate” is much better? After winning France’s presidential election in May last year, this banker has given gifts of millions of euros in tax breaks to his corporate friends. At the same time, he rammed through reactionary reforms to French labour law, attacked pensions, and cut the budget for social security as well as welfare payments.

And now it is our Prime Minister, the “feminist” Justin Trudeau, who is hosting these people, and he is doing it in the most cynical way, attempting to give a “progressive” veneer  to this meeting of capitalist politicians. Speaking about the last G7 meeting, Trudeau affirmed that gender equality “will be on the agenda next year.” But how can we possibly take him at his word when he sells $15 billion in arms to Saudi Arabia – a reactionary theocracy which brutally oppresses women and sexual minorities? Some “progressive” agenda!

Not pleased with the clashes at the 2010 G20 meeting in Toronto, this time around the capitalist politicians would like to have their secret discussions hidden away from any major population center. And Trudeau is more than happy to ensure their protection. Secluded in the luxurious Fairmont Manoir Richelieu, surrounded by an enormous fence, the G7 will be protected by a force of over 5,000 security personnel drawn from the RCMP and the Canadian armed forces. The security costs will likely be over $300 million. And who will be paying for this? The workers, no doubt.

The real program of the G7

While Trudeau is promoting a “progressive program” for the G7, it is clear that this is just an attempt to confuse people as to the real nature of the organization. Peter Boehm, Trudeau’s personal representative, recently said that the G7 would be concentrating on issues of, “economic growth, economic inclusion, climate change, future jobs impacted by artificial intelligence.” But what is the real agenda for the G7? Let us not forget that those participating in this summit are the very same capitalist powers who, for years following the 2008 crisis, led the charge pushing austerity measures and attacks on workers, in order to pay for the hundreds of billions given to the banks and major corporations. The last thing we can expect from a body like the G7 is “progressive” measures. How can we possibly speak of “economic inclusion,” in a system where the 1% always finds new ways to hide their money in tax havens, while the workers are forced to endure falling living standards? We can expect nothing from the representatives of the most powerful capitalist countries.

If the leaders of the G7 think that they will be able to find a solution to kick start the economy, they are fooling themselves. The OECD is predicting a sluggish worldwide growth of 3% a year until 2060! The reason is simple: global capitalism is in a prolonged crisis. It has been almost 10 years since the great crash of 2008 and nothing has been settled. Unemployment rates are historically high in Europe, most notably at 9.7% in France, 16.4% in Spain and 20-23% in Greece. On top of this, public and private debt has reached astronomic levels – with the total global debt market sitting at $233 trillion! This is acting as a massive weight on the entire system, putting downward pressure on both investment and consumption.

No matter what is formally decided at the G7, these seven great powers cannot escape the fact that their system is moving towards a new crisis and there is no way out within the confines of the system.

Fight the G7 with socialism!

This coming June, we need to mobilize massively to send a clear message: we do not want you or your rotten system! This is pertinent to all layers of the exploited and the oppressed and therefore it is important that all groups mobilize against the G7. In particular, workers’ and students’ unions have a central role to play here. They have the members, the traditions, and the resources to mount an effective challenge to these reactionary leaders and their agendas. But we need to do more than just demonstrate against the G7. We must also stand for something. The G7 is simply a representative of the global capitalist system that is rotten to the bone. It’s the system that needs to go!

Yes, we do need to confront economic and social problems – and in this fight, the G7 and the capitalist system that it defends is a direct obstacle. None of the “progressive” issues that Trudeau wants to discuss can be resolved at the G7. None of these issues can be resolved within capitalism. This is why we believe that we need to oppose the G7 by fighting for a socialist society. Only with socialism, based on an active workers democracy, will we be able to destroy the roots of these economic and social problems.

All of the wealth of our society is created by the working class. By taking control of the main levers of the economy, which manage energy, transportation, telecommunications, the mines, the forests etc., workers could organize to democratically plan production. We could finally gear the economy to the needs of the population and not the profit of a few individuals.

Our mobilizations should not stop at resisting the G7 in June: We must continue the struggle against the capitalist system in its entirety. It is urgent that we fight for a socialist program within the labour movement and the student movement. Only in this way can we truly sweep away the capitalist system defended by the G7!