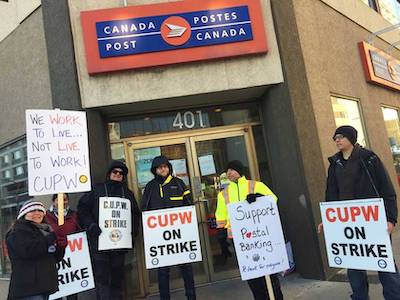 This week, delegates arrive for the Canadian Union of Postal Workers’ 2019 convention in Toronto. Postal workers will be deciding the direction of the union after yet again being legislated back to work. Sadly, a huge opportunity to defy this legislation was missed in 2018. The union needs to elect a leadership that is vocally critical of the lack of defiance last year, and is committed to defy in the future.

The right to strike is not currently worth the paper it is printed on in Canada. Legislation to remove the right to strike has transitioned from being the exception to the rule. Sometimes legislation is tabled even before workers strike, and it makes no difference whether it is a Liberal or Conservative government. This holds true both provincially and federally. The right to strike only exists to the degree that a strike has zero impact. Without this right, everything that has been built and won by organized labour stands on the chopping block.

In the 2018 round of negotiations, CUPW had everything going for it. There was solid support from the workers for strike action, and the public was widely sympathetic to the main issues of the union. Pay equity for majority-female rural mail carriers and an end to the injury crisis provoked by forced overtime were popular and understandable issues around which to mobilize support. This put serious pressure on the Trudeau Liberals who had previously (and disingenuously) expressed sympathy for postal workers. The prospect of the “feminist” Trudeau denying pay equity seriously weakened the hand of the government.

As the job action began, anybody with eyes to see could tell that back-to-work legislation was on the horizon. The union leadership attempted to mitigate this threat by adopting a work-to-rule tactic and the use of rotating strikes. Union officials argued that this strategy would cause millions in lost revenue for the corporation as people avoided the postal service in the run-up to Christmas; that it would save the union the expense of an all-out strike, and that it was supposedly less likely to provoke back-to-work legislation. However, many union members subsequently complained that rotational strikes meant that workers got zero dollars in strike pay, as CUPW by-laws stipulate that picket pay only gets paid out after a striker spends 10 consecutive days on strike. The weaker form of action did not stop the legislation. It did, however, irritate the rank and file of the union who needed to be mobilized en masse if defiance was to be enacted. Only when workers are brought out on the picket line will they have the time to democratically control the strike from the bottom up, rather than be dictated to by bureaucrats from the top down. Such democratic control is essential to unleash the power and creativity of the membership necessary to defy.

When the legislation was announced in late November, the rotating strike should have been escalated to an all-out strike to show that workers were not going to be intimidated. However, there were confused messages from the top of the union about the possibility of defiance. CUPW President Mike Palecek said that “all options are on the table,” while other union officials were telling people to go back to work. Some locals refused to go back to work and spontaneously struck or occupied their workplaces for extra days against the direction of the Ottawa leadership.

Back-to-work legislation against CUPW coincided with the closure of GM Oshawa and a wildcat walkout of autoworkers. There was a real possibility for working class struggle for the right to strike and the right to decent employment to combine into a powerful mass movement. If CUPW called for mass demonstrations in every city on the day the legislation was enacted, noon on Nov. 27, then the 50,000 postal workers would have been joined by hundreds of thousands of other workers in every major city. Instead, CUPW head office and Palecek issued a directive for workers to return to work and await instructions. The pickets by community allies conducted over the following weeks were heroic, but left postal workers passive. These tactics could never defeat the government.

Let us be clear—the failure of CUPW to defy back-to-work legislation in 2018 was a betrayal of the historic role of the union. Back-to-work is going to be increasingly used until some sector of organized labour has the guts to defy it, and we cannot think of any union that could have been better placed than CUPW in 2018. If not CUPW, then who? If not now, then when? All the arguments against defiance are in fact arguments for perpetual capitulation and the eventual death of the labour movement.

Some say that defiance was impossible because of fines. There are always fines, so this argument is the same as saying that the struggle against back-to-work is pointless. An explosive mass movement, with genuine cross pickets where postal workers strike and picket out other workplaces, would insist that no fines are levied as a condition of a return to work.

Others say that the Canadian Labour Congress refused to organize a general strike. This argument confuses the passive bureaucrats at the top with the workers at the bottom. It is also asking others to do what you are not prepared to do yourself. Weakly saying, “I’ll only defy if you promise to support me” does not inspire much confidence; saying, “You go out so I don’t have to” inspires even less. Nobody is going to fight your fight for you. The movement needs leaders that will say, “We are fighting this injustice, are you with us or are you going to betray us?” Worker-to-worker solidarity and cross-pickets will force the leaders to get off the fence. The desire to fight is real but needs a spark to set it on fire.

During the movement against the Liberal premier of British Columbia Gordon Campbell, the BC Federation of Labour never organized a general strike or said that they would. But individual unions defied back-to-work legislation anyway, starting with the teaching assistants at UBC who led a heroic struggle and beat back the attacks of the university administration and the government. After the example was set, the ferry workers followed suit, followed by the nurses and finally the teachers. What was important in this movement was that the example was set which enthused rank-and-file workers and demonstrated in practice that it could be done.

Unions would not exist today, and there would be no right to strike, if workers were not prepared to defy the law in the past. If the present union leadership were around in the past then we would have nothing today. Past CUPW militants were not afraid to go to jail for justice.

Mike Palecek has said that the union was not united around defiance. While this may be true, it must be known who was not willing to fight. Rank-and-file CUPW members have demanded to see the minutes of the executive and see who voted which way on the question of defiance. This information must be released so that the members can decide who to vote for in the coming elections.

Some say that the workers were not prepared to defy. This is frankly a slander against many rank-and-file workers and shows no understanding of how collective organization and leadership work. It is one thing to embark on a just struggle when you know you have leaders who will support you. It is another thing to enter into illegality when your leaders are not inspiring confidence. There are wide and credible reports than many locals were prepared to go out, that there were mass resignations of shop stewards to facilitate this, but these militants unfortunately did not have the confidence and organization to defy both the government and the national leadership.

Given that the majority of the CUPW executive were opposed to defiance, what was needed was a network of rank-and-file CUPW militants that could have organized from the bottom up independently of the capitulatory executive. This rank-and-file body could have demanded the immediate calling of membership meetings as soon as legislation was tabled to demand that the leadership organize defiance. The rotating strikes and lack of membership meetings effectively silenced the democratic voice and control of the workers. Sometimes what is necessary is the propaganda of the deed. If only a single local had gone out, with pickets potentially organized by bottom-up rank-and-file initiative, then it would have posed the question point-blank to the rest of the union: either join these courageous workers or leave them to hang. Under these conditions, we do not think the faint hearts at the top would have the gall to suppress those that fight. Instead, the positive example would have spread like wildfire.

CUPW needs a pro-defiance leadership and a militant rank-and-file network to keep that leadership from capitulating. Every candidate for leadership needs to say how they voted on defiance, and if they believe the lack of defiance was a mistake. Every candidate needs to commit to leading a movement for defiance for the next round of bargaining, and across the wider labour movement. The right to strike is the key issue for CUPW and the labour movement as a whole. Without beating back this threat, no advancements will be made for working class people. CUPW has a proud history of being at the forefront of the movement. Now is the time that the union take its duty seriously, and stand in the front line to defend the right to strike.