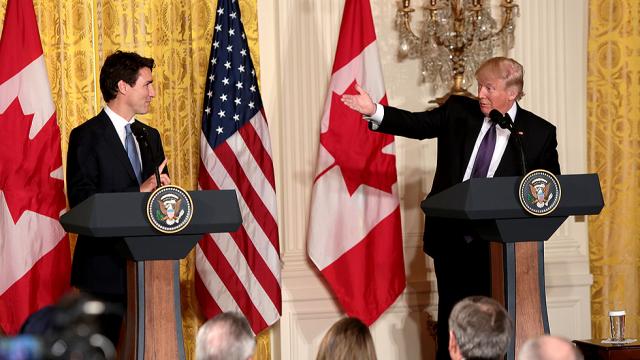 The trade war between the United States and Canada has begun. On July 1, the tariffs that Donald Trump announced against steel and aluminum came into effect. In response, the Canadian government has put counter tariffs in place. The rise in protectionism threatens to drag the already fragile world economy into a deep slump. In this war in which big capitalist powers fight over who has the largest piece of the pie, the workers will be the first victims.

Already, 40 workers have lost their jobs at Tenaris, a business producing seamless steel pipes in Sault Ste. Marie, Ontario. Thousands of other workers worry that they will lose their jobs. According to a study by TD bank, 160,000 Canadian jobs could be lost due to the automobile tariffs that Trump is threatening to impose. This study takes into account the counter tariffs that Canada will impose.

These jobs must be saved. But why should we trust the Liberals? They have conclusively demonstrated that they are more concerned with corporate profits for the bosses than protecting good jobs for the workers. The most clear example of this was in 2016 when US Steel reneged on its obligation to pay their workers’ pensions in Hamilton. Did the Liberals rush to the aid the workers then? No, because they cared more about protecting the profits of the company, which ironically enough is a US company. More recently, Trudeau’s Liberals gave $4.5 billion in tax payer’s dollars to the bosses of the American company Kinder Morgan. Do people really believe that this bailout will result in good jobs? The only guaranteed outcome of the deal is that the company owners profit. In fact, Kinder Morgan already gave $1.5 million bonuses to their president and vice-president following the bailout from the Canadian government. While hypocritically claiming to be defending Canadian workers, the Liberals are giving massive sums of public funds to an American billion-dollar company. When the question is the interests of big companies, the Liberals are loyal to no nation.

Trudeau’s Liberals also gave close to $375 million in interest-free loans to Bombardier, at the same time as the company was laying off thousands of workers in Canada. Similarly, it was recently revealed that they wrote off a loan to the Canadian auto industry. They have refused to release details on this but it was most likely the loan given to GM and Chrysler following the 2008 crash. As of March 2017 these companies still owed $1.15 billion. Both GM and Chrysler received billions in bailouts while laying off thousands of people between 2009 and 2013. In 2017, GM laid off another 625 workers at an Ontario factory. When the bosses come for money, the Liberals are eager to shower them with billions but when the workers are getting attacked and laid off, the politicians are nowhere to be found. All these examples demonstrate that Justin Trudeau is not our ally in the fight to save good jobs.

We must view Trudeau’s recent measures with this in mind. In response to Trump’s tariffs, Trudeau announced $1.7 billion in financial aid to steel and aluminum businesses as well as $250 million to reinforce the competitivity of Canadian manufacturing businesses. But there are absolutely no guarantees that this money will go to maintaining good paying jobs, pensions and benefits. The entire history of public money being given to the bosses shows that they simply pocket the cash and layoff and attack the workers anyway.

In Quebec, there is a similar process taking place. Premier Philippe Couillard pretends to defend the workers against protectionism. But this is the same Liberal government who, not surprisingly, has done nothing to help the 1030 workers at the aluminum smelter at Bécancour who have been locked out since January. This is also the same Liberal government who gave billions to Bombardier while they were eliminating thousands of good paying jobs. In addition to this, the Liberals have multiplied the attacks on the working class over the years. Whether it is the generalized austerity that followed the election of 2014, the phony collective “agreement” that they imposed on the public sector workers in 2015, or the back-to-work legislation they used against the construction workers in 2017, the Liberals have sufficiently demonstrated which side they are on. The fate of workers, jeopardized by protectionism, can certainly not be left in the hands of Philippe Couillard and the Quebec Liberals. 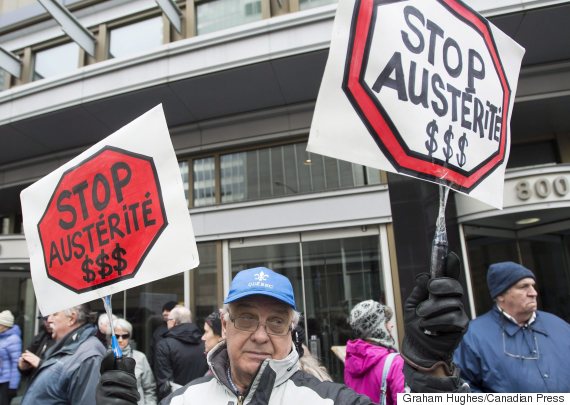 We must be clear. This trade war is not our war. We did not choose to be dragged into this dispute which will hurt both Canadian and American workers. We shouldn’t forget that there have also been job losses on the other side of the border with 60 workers losing their jobs at Mid-Continent Nail, a company that produces nails.

Canadian and American capitalists, as well as their political representatives, are used to maintaining relatively cordial relations. These thieves and bandits normally come to a gentleman’s agreement about how best to exploit the workers of both countries and share in the spoils. Now, Donald Trump refuses to play by the usual rules and attacks his “allies” with tariffs, attempting to steal more of the loot for American companies.

Many union leaders have deplored Trump’s protectionist measures which will affect their members. But the majority of them are putting their trust in the Liberals to save jobs. For example, the leaders of Teamsters Canada stated that they “fully supports the Government of Canada and Prime Minister Trudeau” against Trump. Equally, Jacques Létourneau, president of the CSN (Confederation of National Trade Unions) stated that, “We call on the Quebecois and Canadian political class to stand up against the delusions of the American president and do everything … to preserve our industries and our jobs.”

This situation is not much different at the political level. In what has been called “the sacred union” by many in the media, the Conservatives, the Liberals, the Green Party and the federal NDP unanimously adopted a motion condemning Trump’s actions and his attack on the “long-standing, equitable trading relationship with the United States of America.” This motion was actually proposed by the NDP.

Donald Trump is a bandit, but it is a serious error to unite with the parties of the Canadian bosses in order to struggle against him. Where were the Conservatives when the bosses of GM and Chrysler laid off thousands of workers? They were rewarding them by handing them massive sums of public money. The bosses of these big companies were laying off workers en masse before Trump’s tariffs and the Liberals and the Conservatives did not lift a finger. We cannot rely on these parties to help the working class.

A recent Nanos poll revealed that while the majority agreed with giving aid to the steel and aluminum sectors, Canadians were divided on giving aid to the automobile industry. The billions given to the auto industry bosses after the 2008 financial crisis is obviously still fresh in the minds of Canadian workers. In total, it is estimated that the bailout of the industry cost taxpayers no less than $3.7 billion. Workers have a healthy distrust for flooding the coffers of the auto industry billionaires without receiving anything in return. There is no reason to believe that things will be different with steel and aluminum. The companies in this industry also operate in the interest of profit above all else. There can be no guarantee that jobs will be protected if these companies are left in the hands of those who exploit us.

We don’t need to look far to find methods of struggle that actually work to protect jobs. In January 2004, Alcan decided to close its aluminum smelter in Arvida, and 560 workers responded by occupying their workplace and continuing production under workers control for 19 days. While the struggle eventually ended with the smelter being closed, the workers forced Alcan to commit to transferring their jobs to other plants instead of eliminating them altogether. Just a couple of years after this, there was a wave of factory occupations in Ontario. In the space of a few weeks, there were occupations at Collins & Aikman, a car parts manufacturer in Scarborough, followed by a steel plant in Hamilton, both plants threatening to shutdown without paying severance to the workers. At the Scarborough factory, the movement led to solidarity strike action in other factories and in less than 48 hours and the bosses finally agreed to pay the severance pay to the workers. In Hamilton, the bosses backed down in less than 24 hours. These examples give us a glimpse of the methods that the working class must take up if we really want to lead a struggle to save jobs. Only militant working class methods of struggle are capable of winning us anything.

The capitalists of all countries are trying to drag us into their struggle for their selfish interests, in which the workers receive nothing but crumbs. With capitalist free trade, good union jobs are relocated to places where working conditions are worse. With protectionism, tariffs drive down production, which leads to layoffs, and therefore the loss of good jobs. In both cases, the workers lose.

On July 1, Trudeau stated that “Canada’s workers build the roads and bridges that get us to work on time and back home again. They put food on the table for families from coast to coast to coast.” Coming from Trudeau, these are empty words as he does nothing to protect workers but simply implements measures to protect the profits of the bosses. But there is a grain of truth in his statement. Workers produce all the wealth in our society. This is why it must be the workers who control their workplaces. But Trudeau prefers that factories remain closed rather than them being in the hands of the workers.

Above all else we must fight the enemy at home. By taking a militant stance against the bosses that exploit us, and nationalizing the big companies, we will be in a place to call on our American comrades to do the same. We will then be able to establish socialist fair trade, free from the selfish interests of the capitalists. We will be able to plan production in harmony with the needs of the majority, and not the profits of a minority of Canadian, American or Quebec bosses. In this struggle, we can only rely on our own means.

No confidence in the Liberals!

The workers can only count on themselves!

A factory closed is a factory occupied!